How to Create Your Own Three Piece Takedown PVC-Fiberglass Bow Part 2: The Fourth of July Bow

A few months ago, I wrote up a little post about making a PVC fiberglass rod takedown bow and made an associated video.  That post has since been turned into a magazine article, which you can find in this month’s (July/Aug 2015) copy of Backwoodsman magazine, quite possibly my favorite magazine of all time and a great one for those that like to tinker with things and enjoy the outdoors.

So I decided to do a redux of my original design with the goals of increasing the draw weight, getting an idea of the speed, and improving the appearance.  Without further ado, I present the Fourth of July bow (finished around the Fourth of July – happy belated Fourth for US readers – adorned with red, white, and blue). 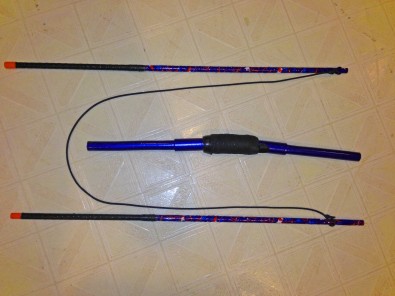 The design is similar to the one I wrote about before, with a central PVC riser that fiberglass rods slide into.  This time, I added additional strength to the core by using three pieces of telescoping PVC: 1/2 inch pipe fitted into a heated piece of 3/4 inch pipe fitted into a heated piece of 1 inch PVC pipe.  I used a longer piece of 1/2 inch PVC than I did before, hoping the added resistance would increase the weight a little.  I also painted the riser metallic blue, added a grip, and an arrow rest for more comfortable shooting (before, the arrows were shot off the hand).  The fiberglass rods were wrapped in star-spangled duct tape that I think I found in a dollar store.

Sometimes I wish I had shorter arms, making buying shirts and finding arrows easier.  But, alas, I don’t, and sometimes a bow that works well for someone with more normal arms is uncomfortable for me.  For this one, I ended up sacrificing the draw weight a little in favor of comfort, figuring that the longer piece of PVC I used for the handle would still add more draw weight than what I had before.  I deflexed the handle of the bow (making it curve in) a bit to make it more forgiving to shoot (less likely to shoot up in weight in the last few inches, a.k.a. “stacking”).  At a 32 inch draw, it still pulls a modest but respectable 40 pounds and is comfortable even for my organutan arms.

I was curious to see how fast it would be, so used a phone app chronograph to get an idea of the speed.  I think there’s probably some variability in how well these apps work (they cleverly use the sound of the bowstring twanging and the sound of the arrow striking the target to estimate the bow speed), but they probably give you some idea.  Using 446 grain arrows, or about 11 grains per pound for this bow, here were some of the results: 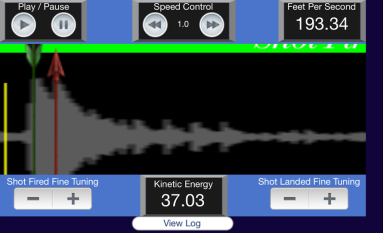 So between 190-200 fps according to this app with that weight of arrow (446 grains) – on the higher side for the bows I’ve made with PVC, but given this one has light fiberglass rod limbs (capable of moving faster with a thinner profile than heavy PVC), I guess it’s not too surprising.

Interested in making one of these for yourself?  Go for it!  You can do it in a few hours, and even if you mess up, you’re only out a few bucks, making it easy to give it another go.  It’s pretty easy, though: check out the last video for a walkthrough, and see the parts list in my last post or in a copy of Backwoodsman magazine (where to find it).  Let me know if you have questions!

4 thoughts on “How to Create Your Own Three Piece Takedown PVC-Fiberglass Bow Part 2: The Fourth of July Bow”