… My shooting equipment was back in my cabin, including the three–part take–down bow we’d all been issued with the quiver of arrows fitted for my bow and draw length, but even though I was better with my own equipment, it would take too much time to get it, so I grabbed a spare shooting glove, a bracer, the longest arrows I could find, and a warbow with the heaviest pull I could accurately manage from the ship’s arsenal and rushed out onto the deck, where the men were firing away diligently with flaming arrows.  The monster swatted most of the projectiles away.  The few that did hit the serpent bounced off, and the fire fizzled away against the animal’s wet exterior.  The serpent was playing a game with us.  I could have sworn that it was smiling …

Aside from the fight with the sea serpent, this passage from The Thirteenth Hour makes mention of a “three-part take-down bow” that the soldiers in the passage (Imperial Rangers) have been issued.  And although I didn’t draw a picture of that particular bow being used, I did later draw an idea for one: 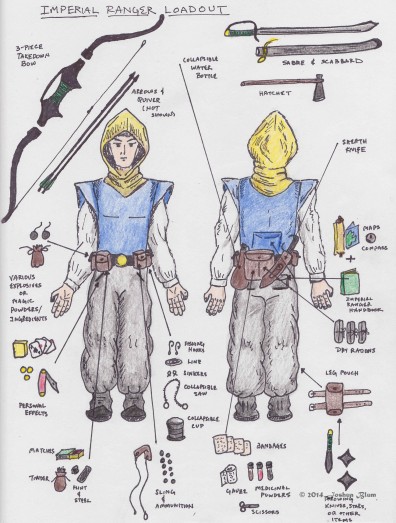 If you notice in the upper left hand corner, there’s a three part takedown bow.  Although I wrote about this before, the bows I created in those two posts (1 and 2) didn’t really look like the one in the drawing.

So I decided I’d continue fiddling until I could replicate something more closely resembling the drawing.  Since the drawing above was meant to be a page taken from a general training manual for these special soldiers, I decided to give myself the flexibility of some artistic license with the design and come up with a 3 piece take down bow (made of PVC) that was both functional and worthy of being issued to an Imperial Ranger.

To back up a bit, I have been making bows out of PVC pipe for the past few years.  There is a wealth of information out there on how to do it, and I wish I’d known about it sooner, as it has revitalized my interest in archery in a way that no store bought bow ever could.  In any event, the general idea is that because PVC can be flattened when heated, you can basically bend it into (almost) whatever shape you want.  If flattened, the once semi-rigid pipe will bend easily, and owning to the inherent resilience of the material, it will generally spring back to its previous shape.  And because PVC is cheap, easy to find (at least here in the US), and easy to work with, the learning curve for making a bow out of PVC pipe is low, much lower than making a similar bow from wood.  So for this project, I decided I’d try to make a PVC takedown bow that Logan, the main character, would have carried.

Here were some early plans:

My original idea was to have a central riser made of thick diameter PVC where the limbs, presumably made of thinner, more flexible PVC, would fit inside.  I thought that if the joints were reinforced with an outer sleeve and inner fiberglass rods, it would provide sufficient rigidity to make this central part of the bow strong enough to withstand the stresses of being bent and released, despite the inherent weakness of a takedown design.

Well, as it turns out, the design I picked – a Cupid’s bow shape reminiscent of an upper lip – has lots of stress on the limbs at those exact spots where I decided to split the bow in thirds. Whoops.  As you can see in the picture below, this central piece had a bunch of parts – the main piece of 1″ PVC, another outer sleeve heated and wrapped around the handle for strength, two inner 3/4″ PVC pieces to serve as guide posts for the hollow PVC limbs, and (not shown, two fiberglass rods inserted in the ends of the white pipe for rigidity). 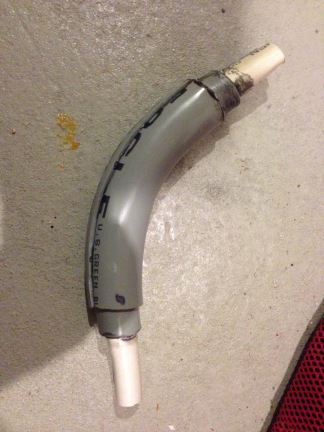 I only figured none of this was going to work after making a prototype, which naturally took quite a bit of time.  Despite all the reinforcements, there was still too much stress on the joints to be safe.  Needless to say, I was, how shall we say, somewhat … peeved?

But that’s the way it goes sometimes.  Making bows, like a lot of things in life, is sometimes about trial and error and not giving up when things don’t go your way.  There’s usually another solution.  So instead of scrapping the whole thing, I thought for awhile and decided to revise the design and make the takedown junctions in different places.

Here is the end result: 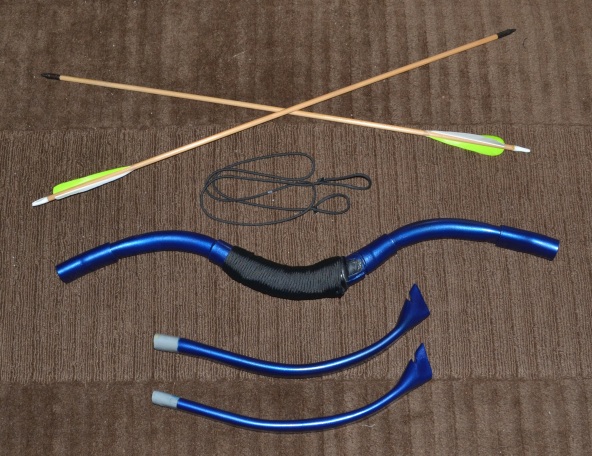 I kept the original Cupid’s bow shape but split the limbs farther back in parts that didn’t bend as much.  Then I just glued the original joints together and filled the riser and limbs with Great Stuff foam (a real mess to work with) to add some resilience to the hollow limbs.  After a few coats of paint/clearcoat, a wrapped paracord handle, and arrow rest, and a string, the bow is what you see in the pictures. 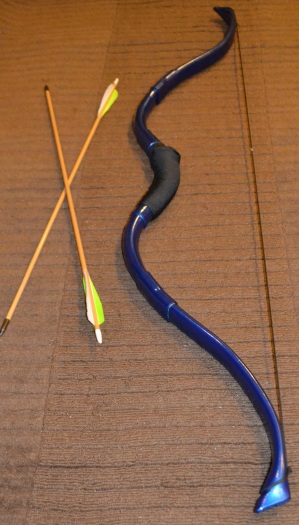 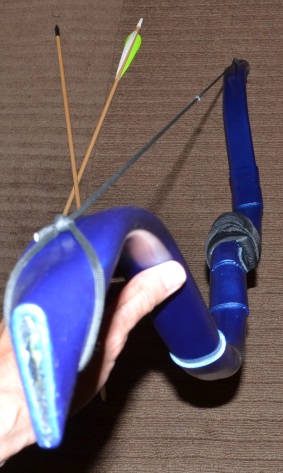 I used 1″ grey PVC pipe* for the whole thing (since that’s what I had around), so it’s heavy, and the reinforced grip is beefy.  It feels like a warbow.  Yet the takedown capability works well enough to fit in a backpack.

*if you’d like to make a bow like this, I’d probably recommend using 3/4″ white PVC, as it’s snappier than grey pipe and easier to work with than thicker diameter pipe.  But if grey pipe (Schedule 40 electrical conduit is what I had) is what you have, you can make a good bow as well, though the PVC is more apt to take a set once the bow is strung.

So how does it shoot, you might ask?  I have to test it at farther distances, but as far as the short distances in the basement go (5 yds), it’s easy to hit what I’m aiming at!  However, it creaks and groans when drawn like a geriatric racehorse the morning after a race.  I find this somehow oddly appropriate given that a guy like Logan would probably find it entertaining, in an albeit dark way, that he was trusting his life to something that sounded like it was going to fall apart.  Luckily, I think the groaning is mainly from some movement of the internals and the outer PVC stabilizing sleeve around the complex handle.  It hasn’t affected performance, as far as I can tell, and it’s a still a pleasure to shoot.  Not as smooth drawing as some other bows I’ve made, as there’s some stacking near the end of the draw, but it’s not bad.  At my 32″ draw, it pulls an even 50#, and shoots a 446 grain arrow somewhere in the 160-169 fps range (if my sound based chrono app is accurate).

Stay tuned for another takedown bow and a video in the near future!