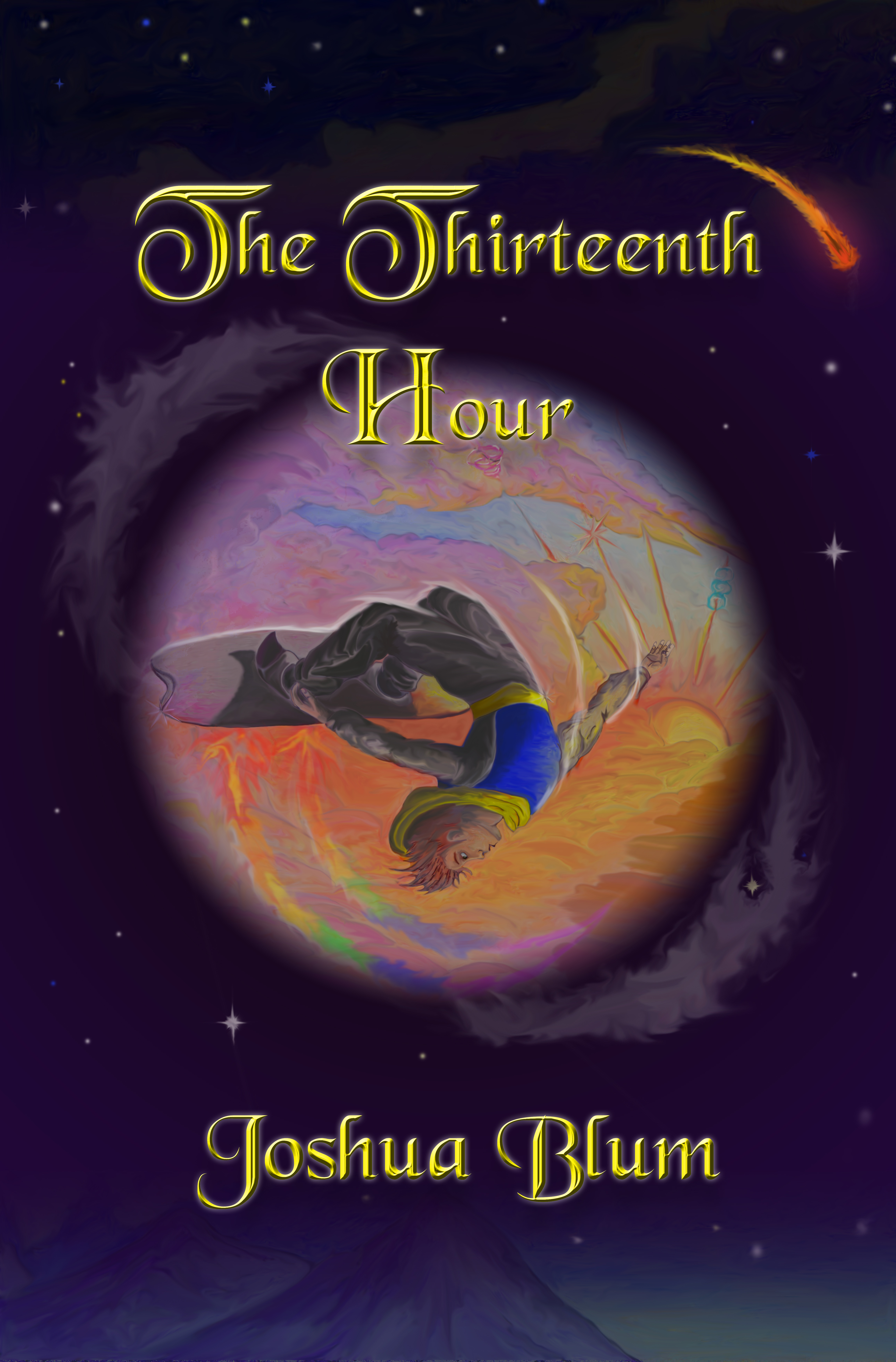 What’s in a Cover?

For the upcoming, 3rd edition of The Thirteenth Hour, I decided the book needed a new cover.   This ended up being a very challenging exercise but one that taught me a lot, and one that helped me get a better sense of this book I had really written mainly for myself without much regard as to what other people thought (which was a great marketing strategy right up until I decided to publish it).

You can see that my initial thoughts on cover design were pretty minimalistic. 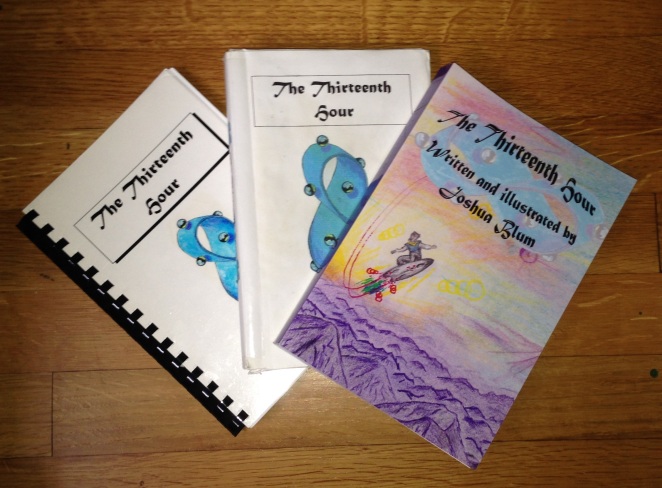 For the first two published editions, I used this cover:

It was an image I used from the book’s interior and one of my favorites.  I personally always liked the font, even though other people said it was hard to read.  It was, however, the only fantasy style font I could find in 1998.  But, in 2015, it was looking kind of dated, and I decided it was time for something not only more readable but less CorelDraw circa 1995.  The image also needed to be cleaned up, and even if I were going to keep the comicky, stylized look for the cover, the colors could be more vibrant and contrasted.

The recent trend in book covers seems to use photographs or photorealistic drawings to make composite images that look like Harlequin romance novel covers or J Crew catalogs.  While there’s nothing wrong with that, I envisioned something different that better reflected the hand drawn images from the book.

I had an idea for an image I wanted to do and created a draft in which the main character, Logan, is doing a backflip while zooming over a dreamy cloudscape with a setting sun in the distance:

I ended up posting this draft on two sites, Kboards writer’s cafe and covercritics.com to get ideas and feedback.  Seriously, folks, if you’re looking to make a cover, sites like these are great free resources.  Of course, the first thing they’ll tell you is don’t bother trying to make your own cover.  There are lots of reasons which you can read on these and similar sites, though a lot of them amount to the same reason people pay someone to change their car’s oil for them – it’s easier, and a pro can do it better and more efficiently.

You can see in the links above that’s of course what most people said.  However, just because everyone says you have to do something doesn’t mean you have to.  We all have our biases.  One of mine is that there is a certain sense of satisfaction of having done something yourself that you just don’t get with outsourcing.  Plus, if you’re involved in writing and self-publishing a book for fun, like I am, you obviously lose that when you pay someone else to do it for you.

However, the big thing is – if you don’t pay in money, you’re going to pay in time.  Money or time, it’s either one or the other.  So for me, it was going to be time.  And that was okay.

As I mentioned, people gave tons of useful tips which I used for subsequent drafts.  My sister in law, an artist, gave me many more on coloring and contrast.  My brother, who knows much more about Photoshop that I do, gave many suggestions on font choice, readability, and overall layout, and my wife, who is not involved in design work, helped provide a reader’s eye.

After many, many hours of tweaking, not to mention trial and error/fiddling with Photoshop, I arrived at the final image: I’d wanted to create a orb on the cover that was similar to the marble-like balls featured in the interior and on the book’s very first cover:

I was also going for a kind of infinity sign created with the clouds encircling the poles of the orb and Logan’s body.  Hopefully, the starry landscape, the shooting star, the darker background, and the rainbow flames coming out of Lightning’s engines evoke a more fantasy-like feel to the cover than previous versions while keeping some air of the original.

In any event, covers are a weird thing.  Everyone says don’t judge a book by its cover, but we all do.  Most of the time, that’s all we ever see.  People’s tastes on what looks good vary widely, so trying to please everyone is impossible.  Tastes also change with time.  The cover should fit other books in the genre, but not too much, because if it looks like everybody else’s, how will it ever stand out?  In the end, what is a cover for?  In my opinion, a cover’s like the impression you hope to make on a first date.  The reason you try to wear something decent instead of your smelly workout clothes.  The reason you shave and comb your hair instead of sporting the I-just-rolled-out-bed look.  It’s the style behind your writing’s substance.  It’s worth paying attention to, but at the end of the day, appearances only go so deep and only get you so far.  Hopefully, the new cover’s belt matches its shoes enough that it helps people give it a chance for a second date.

So – would I do it again?  Given the amount of work and time it took, I’m still undecided.  But I have to admit, I enjoyed the process, despite how much work it turned out to be.  That made it all worthwhile.

The 3rd edition of The Thirteenth Hour will be officially launched on 1/13/16, on its one year anniversary.  Stay tuned for more details in the coming weeks!

One thought on “What’s in a Cover?”