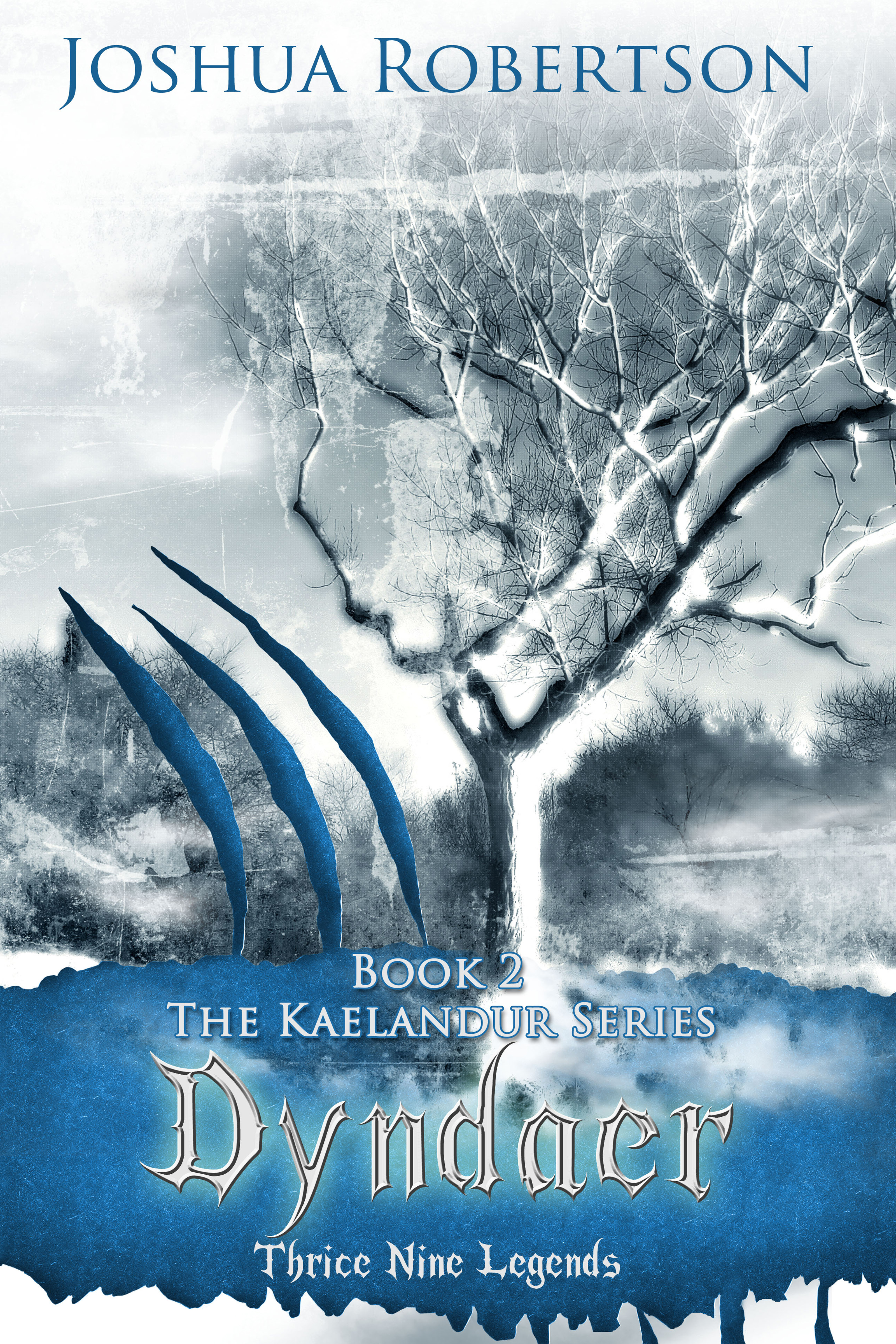 This blog recently hosted three authors in the #NYNB2016 blog tour.  I’m going to continue the author-featuring with this post, though it technically isn’t part of the past tour (though it could have been).  Today, we’ll be taking a look at epic fantasy author Joshua Robertson’s work, especially his book launching today, Dyndaer, Book 2 in his Kaelandur Series.  (Pictures below direct to Goodreads.) 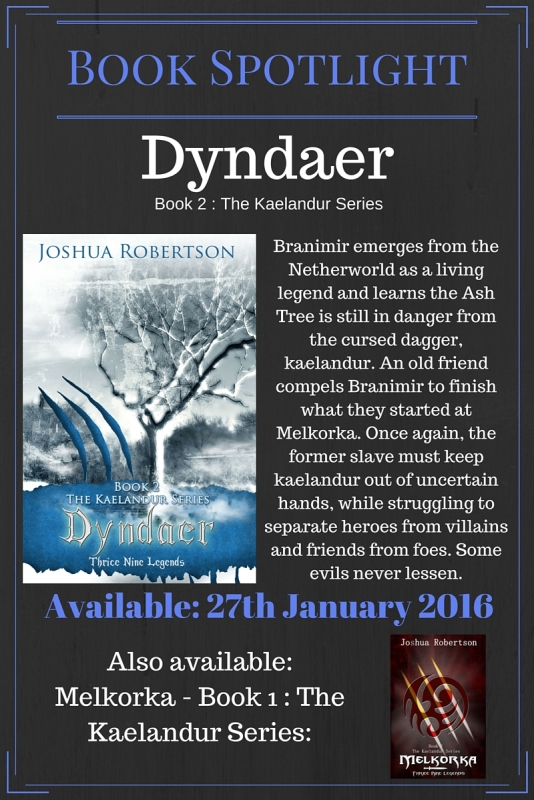 A woman, unlike any Branimir had ever seen, emerged from the crowd and occupied the remaining chair. The bow slung over her shoulder, and the quiver on her back were the last things Branimir noticed. She was shorter than most Anshedar with an oversized head, a scrawny neck, and a sickly, thin frame. Yet her skin, smooth and colored a reddish brown, darker than Branimir, caused him to lean toward her. A sash, red as blood, hung across her shoulder, angled over her small chest.

She sat with her back stiffened and chin jutted forward. Pushing long black strands behind her ears, she introduced herself, “Hanna Bretka, daughter of Briv, from Danduher in Haemus Mons.” She sloshed her mug onto the table after taking a gulp.

“Branimir and Dorofej,” Bran said, “And, excuse my asking, but what are you?”

Her eyes swelled like an owl, a circular black center and the rest filled with a cerulean orb. The colored ring twinkled like the Ojenek in his pocket. “What do you mean what am I?”

Adamus and Dorofej merged in laughter.

“Kras,” she said, “I am a Lilitu. How would you not know my kind? The Kras frequent trade with the Lilitu in Halderon.”

Branimir rubbed the back of his neck with a crooked smile, and meekly shrugged. He could not take his eyes off of her.

“What are you?” Adamus repeated, wiping a tear from the corner of his eye. “Best thing I have heard in two months. Having you travel with me never tires, Hanna.”

“Glad to please you, Adamus,” Hanna muttered, rolling his name off her tongue. “Is this why we detoured to Cavell? I thought we were aiming for debauchery, not expanding on our alleged friendship.”

Here’s what one pre-release reader thought:

… Robertson writes unlike any other author I have read. He engages the reader quickly to draw them in, and keeps them there! There was even a part in the book when I was reading where I found myself in the story with the characters. I subconsciously slowed my breathing and was afraid to make any noise because I didn’t want the characters to get caught! I have never felt that way in reading before. I was speechless after reading it.

“You told me that I would never find joy,” Branimir went on. “I can’t help but think the rune staves might be right, mainly when I think of these past several weeks.”

“Oh.” Dorofej shuffled out from the shadows, rejoining them near the fire. He appeared disgruntled, despite his words. “We have shared pleasant times together, yes? I say, do not sum up all arduous times to be grievous.”

“I was only telling you what I was seeing,” Drak explained. “I did not mean anything by it.”

“All the same, your words have stayed with me,” said Branimir, scooting over to make room for Dorofej.

“I say, Hanna did warn us that we may create our own future by thinking that we know what to expect, yes? Emotions can create your reality if you are not careful,” Dorofej softened his gaze.

Drak sniffed through his nose. “The rune staves tell what will happen. Branimir cannot change it, no matter how he feels about it.”

Dorofej furrowed his brow. “Know that for certain, we do not. Regardless, whether our paths are fixed or not, we choose how we walk them. Dangerous, it is, to find comfort in sadness. Leads only to more sadness, it does.”

“I like that thought,” Drak granted, and then grinned wide. “Feelings are unseen and untouched by anyone or anything. Fate cannot tell you how to feel.”

Branimir held his face, pondering the wisdom of the two. “Telling yourself how to feel seems easier to think about than to do.”

“Such is the task of the living, yes? I say, our minds are riddled with grand ideas and limited enthusiasm to see it done. Driven towards the things we wish to avoid, men are. Drink, does the drunkard; fight, does the warrior; and on and on, it goes.”

“Is it not what they want?” Branimir asked.

Dorofej lifted his eyebrows, “What do you want, Branimir?”

“I want…” Branimir may have never thought about the question before. He had always been entertained with trying to survive, the question of what to live for was beyond his knowing. Yet, upon taking a moment to think, the answer was not hard to come by. “I want happiness, Dorofej.”

As you can tell from the pictures above, there are a number of other books in the series – Book 1: Melorka, as well as the stand-alone volume, Anaerfell.  If you enjoy Joshua’s writing, as his readers seem to do, you’ll want to check out his extensive back-catalog of books!  And, for the authors among you, make sure to check out his youtube podcasts (link below). 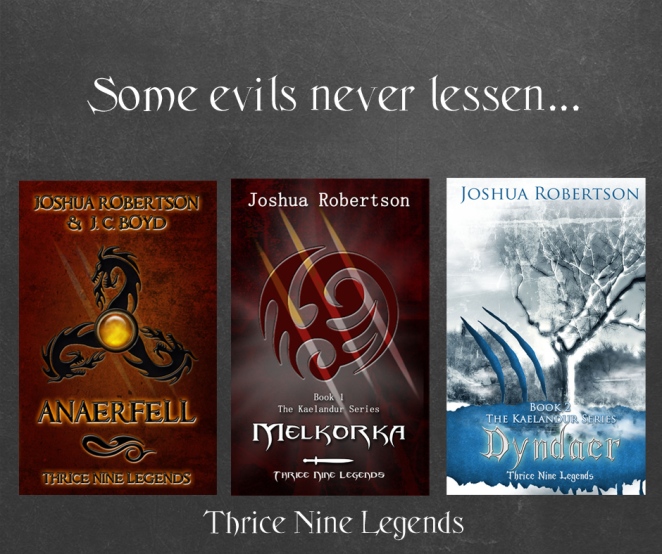 The demons of the Netherworld chased him. Four-legged, wolf-like creatures, known as Dreka, rammed their goat horns at Branimir. The gray, wrinkled skin clung to their gaunt frames. Thin lips were stretched back giving sight to the rows of teeth on the tops and bottoms of their bloodied gums.

Branimir tumbled, swinging his weapon and feeling it tear through flesh as easily as a hot blade through frost. For a moment, he may have heard Dorofej’s riddlesome voice—no, his cry—but Branimir had not the time to listen. Bran had to scramble, and sneak, and stab.

The urgency of the battle and the demons thumped inside of his head.

Crimson splattered his vision as his dagger cut through skin once more. His blade loved the taste of blood; he felt the need to drench it again.

Pain stung his leg, but it was quickly forgotten as demon after demon lunged for him. The Dreka were ever persistent in their attack. He spun, and twisted, and disappeared to avoid every demonic beast soaring through the air, vicious teeth aimed for his throat. They would not reach him. For a moment, he thought he saw a flash of Hanna’s wide eyes, but they looked unfamiliar. Treacherous. Evil. Besides, his dagger was already cocked behind his ear and he felt incapable of restraining himself.

Joshua currently lives in Alaska with his wife and children. In 1999, he began crafting the world for Thrice Nine Legends, including Melkorka and Anaerfell. He is also the author of the A Midwinter Sellsword and Gladiators and Thieves in the Hawkhurst Saga. His short story, Grimsdalr, is inspired by the tale of Beowulf.

Youtube – The Writer’s Edge – for all you authors out there, check out this podcast Joshua and his fellow authors have.  Here’s a link to an episode where they discuss how to write a fantasy novel: