As mentioned in the 30th episode of The Thirteenth Hour podcast, my bro and I tried to make video games when we were kids.  Tried is the operative word, since many didn’t get finished.  My brother completed more than I did, but unfortunately, they’ve been lost to the ether of the internet, at least for now.  So instead, this is a page of games I worked on.  I doubt I’ll get around to finishing them since I’ve basically forgotten how to use the programs we used, Klik ‘N Play (KNP) and The Games Factory (GF), so this is a of museum of sorts.

I don’t know if you can find these programs easily today, but you can download a more advanced, free version called Clickteam Fusion (CF), which I think should open any of the game files below.  There are links to compressed folders below where you can run the .exe file to play the game (if it was completed); you can use CF, GF, or KNP to open the .gam file to see the levels and the sprites.  WARNING – these games don’t run very well on today’s computers!  Just a warning that the gameplay, which was never stellar, is even buggier than it was back in the day …

If you wish to use any of these sprites or elements of these games in your own indie games, please feel free to do so; I only ask you please link back to this page!

My first completed (fan) game, finished in 1999 or 2000, where a young Lara Croft goes on a search for a unicorn with her mentor.  Not long after they find one, their guides turn rogue after deciding they want the unicorn for themselves.  Lara’s mentor is killed, leaving Lara stranded in the woods.  She decides to save the kidnapped unicorn and avenge the death of her mentor.  I hand drew the animations for Lara, as well as a first person point of view perspective of her shooting dual pistols.

Sounds better that it really was.  The gameplay, 20 years later, is basically ASS 🙂

Nonetheless, here are some screen shots: 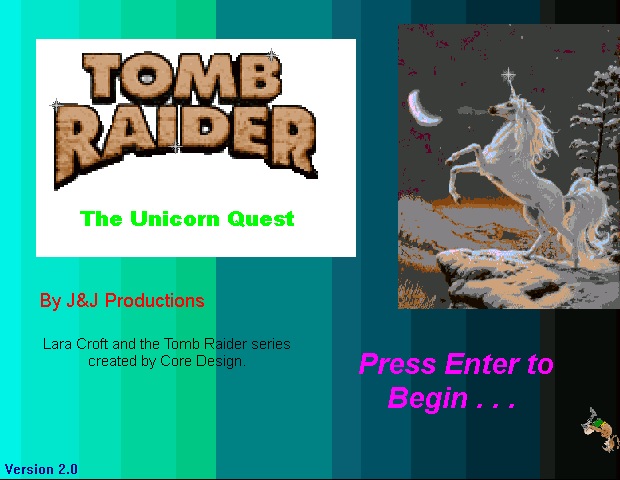 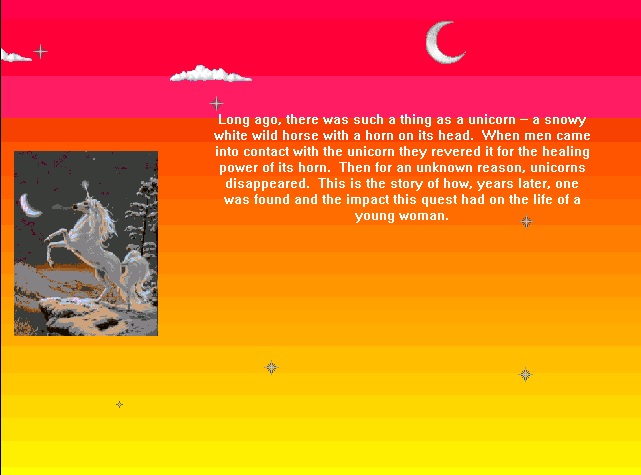 Lara’s job interview – how she finds a mentor 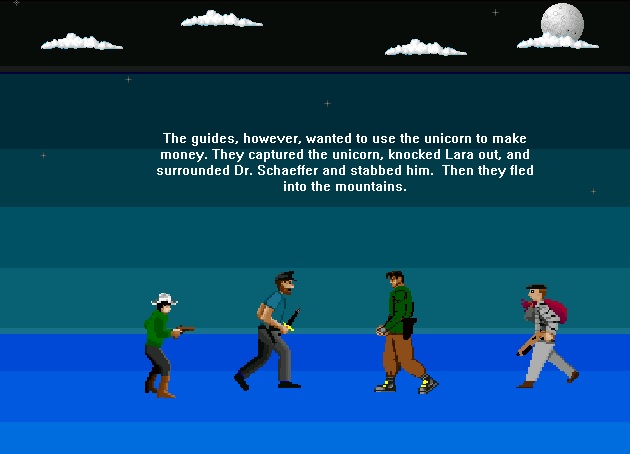 Lara’s mentor gets in trouble 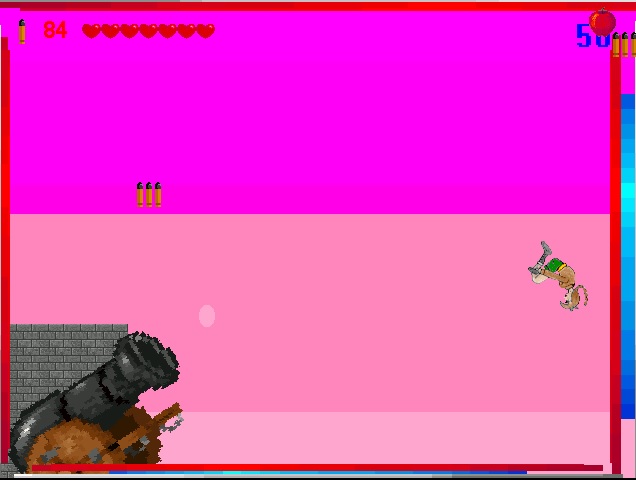 One of the mindless bonus levels where Lara gets shot out of a cannon (?!) and goes flipping around a room getting power-ups.

Lara’s in trouble!  3 motorcycle riders with machine guns are racing to find her, in true 80s movie style.

Lara steals one of their bikes … 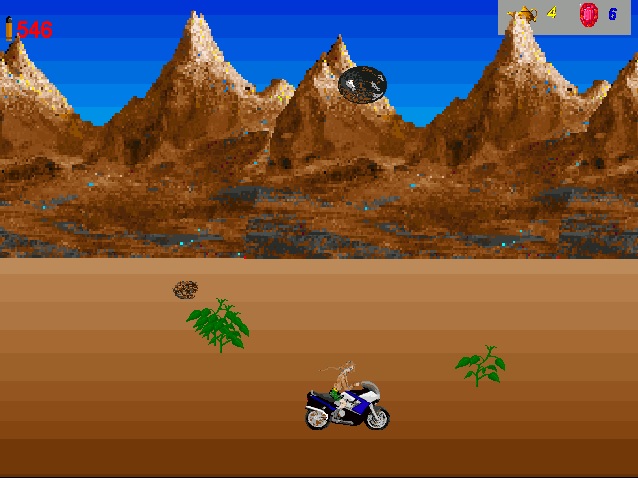 … you get to this very frustrating level to play – you control Lara as she rides along the desert landscape trying to inexplicably avoid boulders falling from the sky.  I programmed it so the boulders with target your movements, but due to the shite control, it is irritating to play. 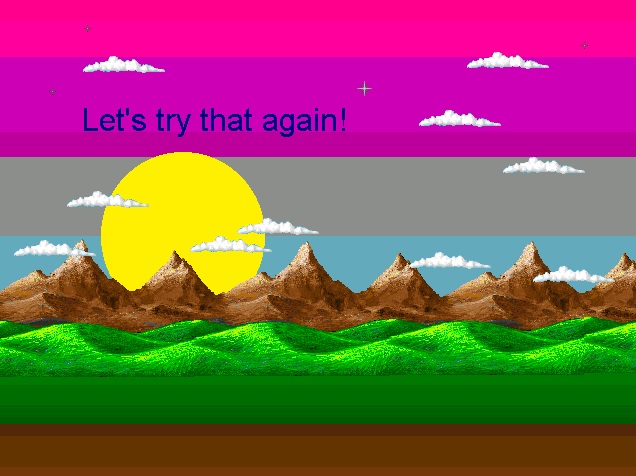 Like a retro Lucasarts game, you don’t really die in this game … if you run out of hearts, the level basically restarts.  In the interim, you see this screen. 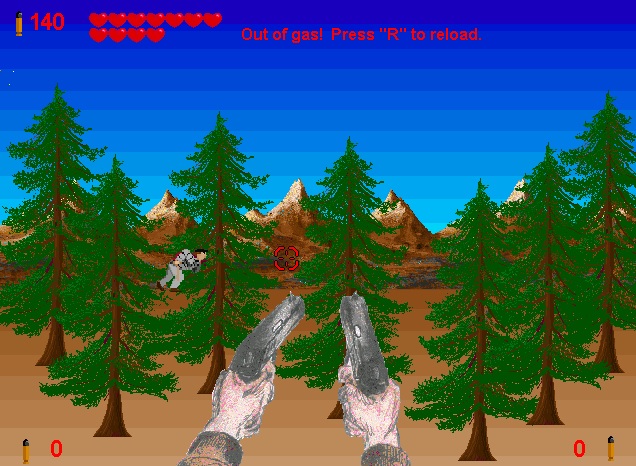 First person shooting in a boss level – the animations of the guns (slides going back, shell casings ejecting, etc) were hand drawn, then compiled in the games program.

Tomb Raider: Shadow of the Wolf

Never finished, but you can download the working .gam file here, which you can use to make a game of your own.  For animated gifs, see the post immediately below.

I wrote about this game here, so won’t repeat myself, but the story (I think) revolved around Lara trying to recover a mythical sword rumored to be part of the Regalia of Japan before a group of ninjas intent on finding it first do.  ‘Nuff said!  I do, however, have a little backstory script written for the plot which I may add to and make an actual fanfic short story one day, which may give me something to do with the pictures I drew. 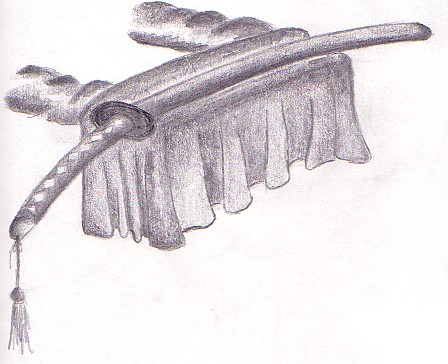 This was the second game I finished – a chimp fighting game.  As a play on the Afro-Brazilian martial art, capoeria, it’s called Chimpoeira.  The game doesn’t run very well on today’s machines – the movements and controls are too erratic to be very enjoyable, but on the 200 MHz machine I had in college, I had a lot of fun playing this game after I made it. 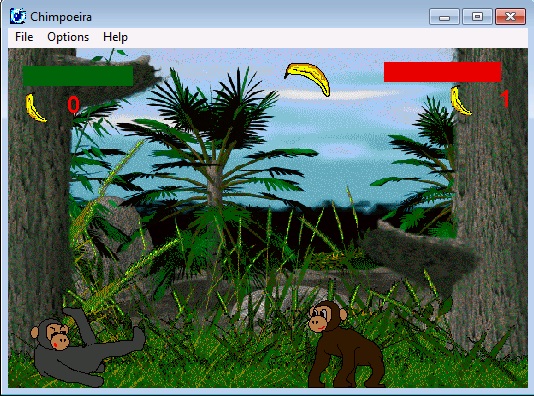 Never finished, but you can download the working .gam file here, which you can use to make a game of your own.

While I was working on the above games, I was also working on a bboy game where you play a kid in the early 80s running around the Bronx learning how to breakdance.  You have to convince a group of local bboys to teach you in exchange for helping them find a place to practice (a constant real-life hassle for most bboys and bgirls).  The title comes from the Herman Kelly and the Life song “Dance to the Drummer’s Beat,” a good old school breaking beat.

This ended up being a pretty ambitious project, since in addition to making all the animations for the dancers and a breaking battle engine, I wanted to make a city for your character to run around in to give it some RPG elements.  Interestingly, the latter part was what I got hung up on and eventually stalled the project.  The battle engine was more of less done, though it wasn’t great in terms of gameplay, and most of the animations – arguably the more tedious and time consuming part – were done, so if someone wishes to make a 2D breaking game, please feel free to use the above file.  I’ll be first in line to play it!

(If you’re interested in playing an actual, finished bboy game, I’d recommend Bboy for the PSP or PS2, especially since actual OG bboys were used as character models. Unfortunately, that game hadn’t come out at the time I was working on this.  It does most of what I was trying to anyway.  Though I haven’t played it, I heard the PSX game Bust a Groove is another, earlier game where you can apparently bboy).

I didn’t have a chance to go through the myriad animations and turn them all into animated gifs, but here are two:

one of the footwork animations

Here are some screenshots: 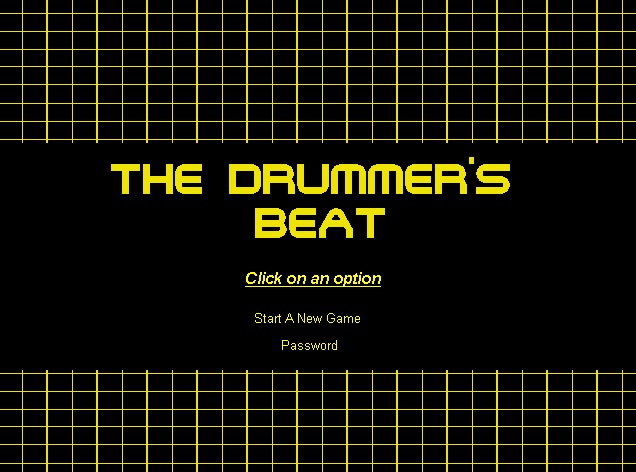 Your main character is the kid on the left, watching the bboys practicing outside your apartment.  Little do they know you’ve been trying to do what they do in your room. 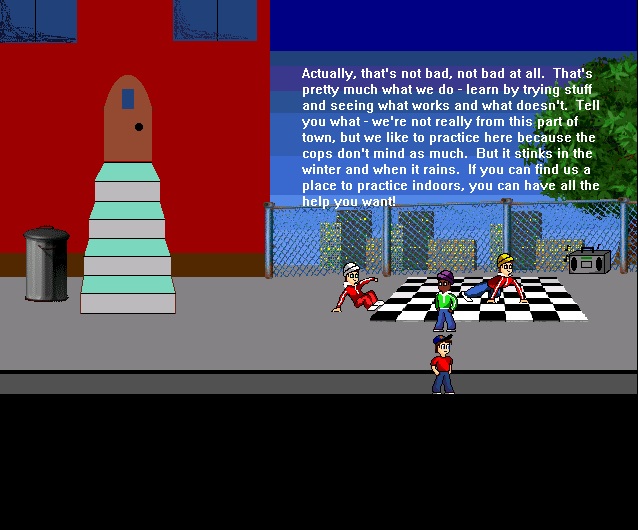 Eventually, you get up the guts to ask them to teach you something.  They sort of agree, once you show them what you’ve been trying to do.  Ah, hip hop, the great social equalizer.  However, they’d like your help in finding a better place to practice …

… so you start running around the city, where you can enter stores and talk to people.

Unfortunately, if you get hit by a car, you end up in that big cypher in the sky. 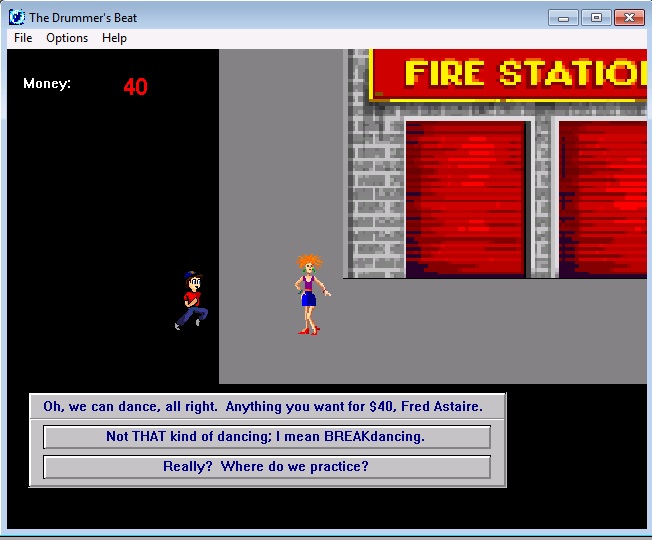 You could eventually earn some cash, which you could spend on things like apples for more energy or better clothes to make it easier to do spinning moves.  OR … you could apparently blow it all on a prostitute, haha!  I totally don’t remember adding any of this but laughed out loud when I found the “Death by Prostitute” level I had apparently included.

If you blew your $$$ on a hooker, though, things didn’t end so well for you in this depiction of pre-AIDS antiretroviral medication (a midi file of “Sexual Healing” would be playing on this screen). 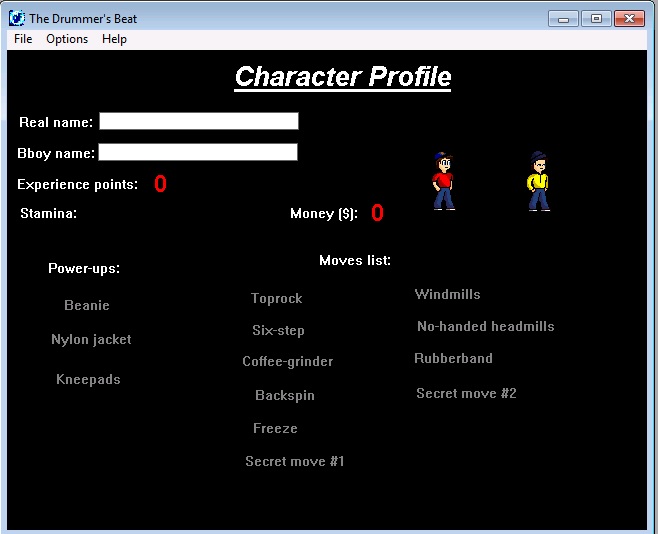 However, if you managed to avoid these temptations and kept practicing, you’d eventually be rewarded with more moves and better gear.

Although I’ll have to do a separate post on this later, I originally thought The Thirteenth Hour might be best as a game rather than as a book (before I knew about ebooks), so I set out on the ambitious task of making it into a video game.  Not surprising I didn’t finish, but given the length of the book, I’m impressed as how much time I managed to sink into this clearly unrealistic goal.

I modified a Mega Man 2 character sprite to make the main characters – here’s Logan and Aurora on Lightning.

This one is different.  I think I drew this one from scratch and have since used it in the original trailer and other videos.

Here are some screen shots: 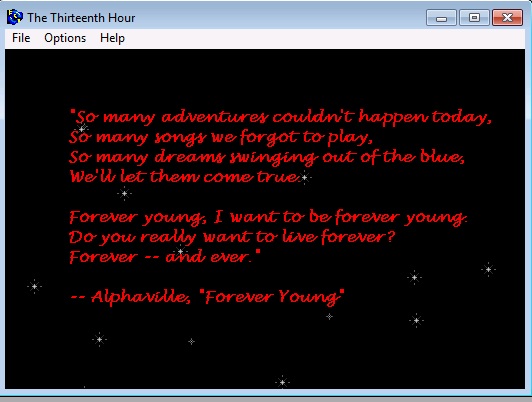 The intro, with lyrics from Alphaville’s “Forever Young” (playing in the background, of course)

… and falls asleep.  In the background, you can hear 13 chimes going off to mark the ringing of the 13th hour.

Once asleep and dreaming, Alfred encounters two shadowy figures who tell him the tale of The Thirteenth Hour … 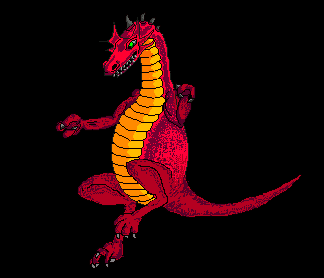 At some point, our heroes will encounter this guy …

I’ll have to go back and take a closer look at this pre-game, so for now, to be continued!