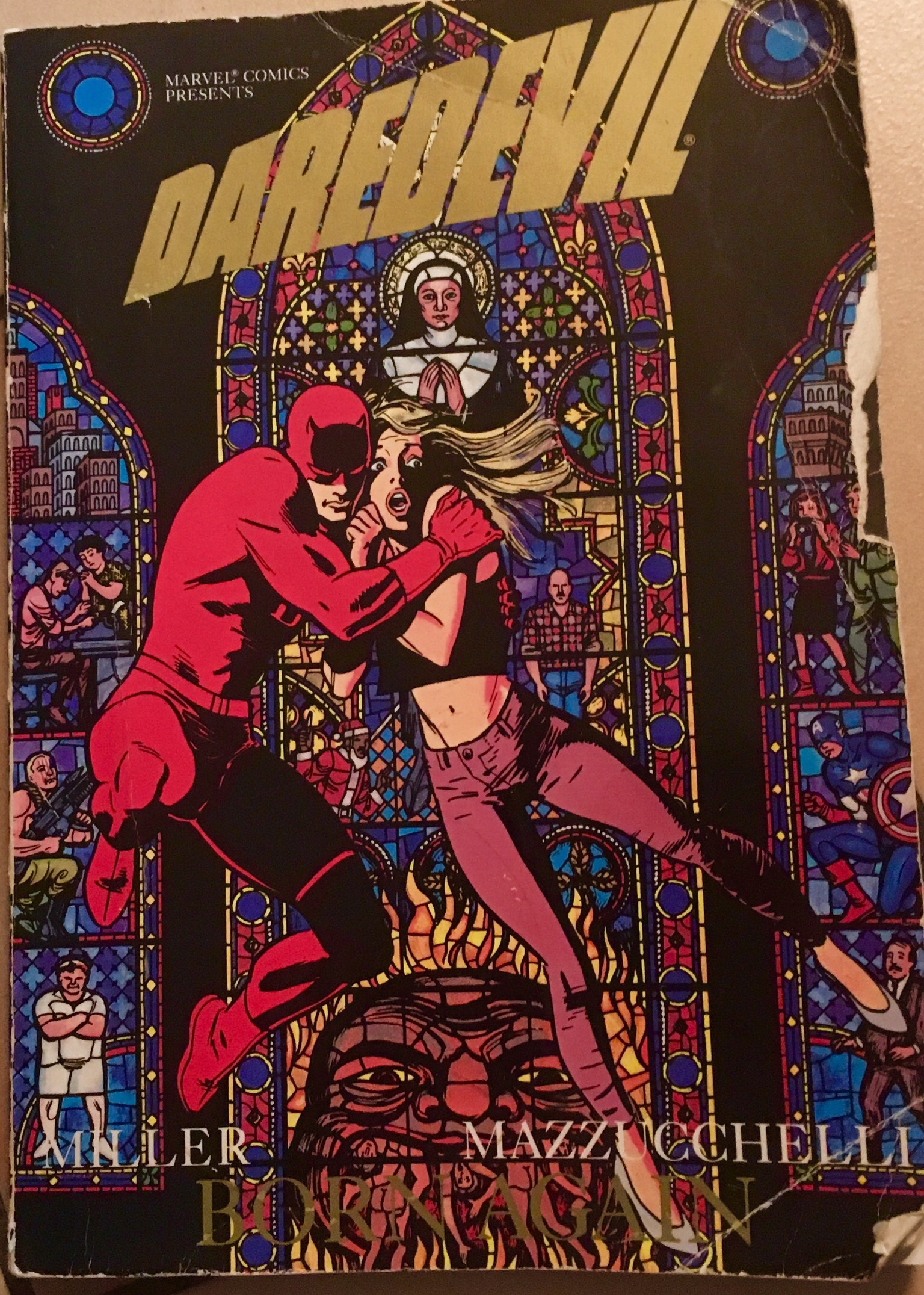 The Thirteenth Hour Podcast #117: “Born Again” and The Man Without Fear

Episode #117: “Born Again” and The Man Without Fear

When I was a kid, I really wanted to like comic books.  I really did.  But I ended up having about as much luck with them as I did with fantasy novels – meaning that, aside from a few isolated one-shot deals, it was a mostly a miasma of confusion and disappointment.  Of course, I had a few tattered Spiderman and Superman comic books, but for the most part, I didn’t have the fainted idea what was going on in them.  I’d mostly just look at the pictures and sort of guess what was happening since I was usually missing part 1 of whatever story arc it was and probably only had issue 3/7, like how someone who doesn’t understand the language might feel when watching a film without subtitles … one can appreciate the art … but everything else is kind of a gamble.

There were a few notable exceptions, though – Dave Stevens’  The Rocketeer and the only Daredevil comic I had a kid, a collection of stories in an arc dubbed “Born Again.”  Ripe with heavy Christian symbolism (sacrifice, redemption, Armageddon) and rendered in mostly dark primary colors depicting a grim and seedy vision of pre-gentrification NYC, writer Frank Miller and artist David Mazzucchelli created a world that you didn’t exactly want to inhabit, but like watching a train careen into a mountain, man, oh man, you couldn’t look away from, either.

In today’s episode, I reflect a little on this fine example of storytelling.

Daredevil, sans costume, takes on one of the Kingpin’s enforcer’s trying to ventilate him.  Nice kick!  Time to visit the dentist …

I read this story around the time I was starting martial arts and liked that it included some martial arts techniques for Daredevil, here fighting an impostor in his costume).    Another nice side kick above and a variety of spearhands below:

At the time, when reading this story, I had no idea Daredevil was blind and always marveled at how he managed to not kill himself jumping all over the place.  I guess that is why he is the man without fear.

I thought this quote was the coolest thing as a teenager.

At their very core, superhero stories laud the best and worst of humanity.  But while they serve as idealistic examples of wish fulfillment, it can be hard to relate to a superhero. By making him fall to new lows, this comic did a great job making Daredevil into a relatable human being.  It’s symbolic he spends most of the story arc without his trademark costume and that the last page shows him as a regular guy walking down the street.  For those of us who haven’t quite fallen to those gritty depths, there is still hope.  Maybe that means we then have something to lose and thus, something to fear.  But in a world where danger seems to lurk around every corner (if you believe what the news says), feeling no fear may not be realistic or even prudent.  But it doesn’t mean we can’t put our best selves forward, one foot in front of the other, and at the very least, fake being unafraid.  In the end, who can really tell the difference?

One thought on “The Thirteenth Hour Podcast #117: “Born Again” and The Man Without Fear”