The Thirteenth Hour Podcast Episode #210: Reflections on The 36th Chamber of Shaolin with Jeremy from Whistlekick

Episode #210: Reflections on The 36th Chamber of Shaolin with Jeremy from Whistlekick

As mentioned this past Monday, this episode was done in collaboration with Jeremy Lesniak, the founder and host of whistlekick, a martial arts supply company and a biweekly martial podcast. Today, we’re talking about the 1978 Shaw Brothers film, The 36th Chamber of Shaolin, a kung fu film that achieved a certain amount of critical acclaim and the rare crossover to mainstream popularity.

I think I first watched it as a child in its original language (Mandarin … I vaguely recall it being on a Chinese TV station that we sometimes got if the stars aligned and the reception came through in just the right way). The only thing I really recall from the film from that first viewing was the main character trying to jump over logs in the water, repeatedly failing, and trying again and again. It’s odd what your brain chooses to remember.  For some reason, that would be my image of the martial arts for the next several years – a series of esoteric, masochistic practices that embodied the literal spirit of kung fu (功夫, a.k.a. “hard work”) and not disproved by television programming at the time, like the 80s ninja films or the 70s Kung Fu series with similar portrayals of training at the Shaolin Temple.

I can’t say my own exposure to martial arts training (which started a number of years later and has continued into the present) has done much to entirely disprove that early impression, either. Training should be harder than reality, my instructors have often said. Interestingly, something I took from my rewatching of the film this time was just training harder and longer, expending more sweat and energy in the process, need not be the best way to achieve success. The main character in the film does train hard in his own right – don’t get me wrong – but he succeeds as much due to his own ingenuity as due to his persistence.

Films like this, as well as my own experiences, are probably why I wanted to write a martial arts story (which ended up being Empty Hands) mostly about training, since the journey from beginner to master seems much more interesting and inspiring than the incremental improvements of someone who is already exceptional or the nonjourney of someone who is already highly skilled and is just plying his trade without much change or improvement.

It’s also interested how much films of this era influenced many people a world apart. If you talk to many of the OGs in the hip hop scene in the late 70s and early 80s, they often reference these kung fu films as being influential and inspirational. Check out this interview with RZA from the Wu-Tang Clan below (the DVD commentary for The 36th Chamber of Shaolin has him on it discussing the film):

If you haven’t see the film, give it a chance and check it out!

This page formerly had what I affectionately dubbed a “starving artist” section on little side hustles you could do (mostly on the internet, often with a phone) to make a few bucks here and there, often in gift cards.  Well, now you can listen to this show (as well as other podcasts) and get paid to do so!  Check out https://www.podcoin.com/ to listen to the show and start earning points that you can redeem for gift cards (Amazon, Target, Starbucks, etc) or donations to a number of charities.  Use the code “Thirteen” when you sign up to get 300 extra points.  The Thirteen Hour Podcast is now on BONUS this week, so you can earn more than normal (1.5x). 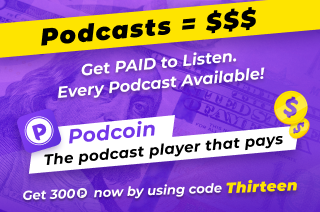 Empty Hands, the synth EP soundtrack to the novella, Empty Hands, is now out for streaming on Bandcamp.  Click on the picture below to listen!

Follow along on Spotify!  There is also a growing extended Thirteenth Hour playlist on Spotify with a growing number of retro 80s songs.