Update: Click this link above if you are finding iTunes is playing episode 74 instead.  Trying to work out the glitch!

Last week, we had our first episode of Brent Simon’s interview, and this week, we discuss things like bittorrent, movie that were probably inappropriate to be shown to children (but were), how we went around humming John Williams scores as kids, and more.  Lots of 80s movies references in this one!

In case you missed the backstory, in the beginning of the summer, during the interview with Jeff Finley (episodes 101 and 102), we talked about Jeff’s making of a little documentary that rocketed to the forefront of Youtube back in 2006 featuring none other than current guest Brent Simon.  Last week, we talked about the making of that short film (called “The Brentumentary,”) as well as the media explosion that happened afterwards resulting in a CD of synthesizer tunes.  It’s, unfortunately, really hard to find now for some reason.  I did manage to track down a copy of another CD Brent talked about last week, the infamously named “Vomit Gold” by the band he was in prior to all this happening, Bellevue:

You can hear Brent’s synthesizer action in the background just like he mentioned last week.  I’ll figure out how to get it to Brent.  Of all people, he should own this disc.

Speaking of musical things, at one point, Brent references a childhood favorite track, which was a disco version of the Star Wars theme.  I’m not sure this is the same one, but here’s one I did find a medley version on youtube, which has the main theme, the cantina theme, and a bit of the Force theme.

We also discuss the notable lack of the Voltron theme in the new reboot, Tranzor Z (finally learned what that robot was called; see below), Transformers, Robotech, G.I. Joe, Thundercats, Prince Valiant (watch the intro here; always thought this was a kickass intro – the full song was done who the synth duo Exchange), and more.  We touch on a few movies my brother I rewatched a number of months ago (discussed in episodes 74 and 75) as well as a full discussion of some classic movie scores by folks such as James Horner (The Rocketeer, Willow,  The Journey of Natty Gann, etc).

Click on the picture for the original Japanese intro, which, true to form given the time period, has men singing in the background.

Find more Brent by going to the original source on Jeff Finley’s youtube channel or on FB at https://www.facebook.com/Brent-Simon-355981196166/?ref=br_rs and, believe it or not, on myspace (https://myspace.com/brentsimon/music/songs) – the music still (sometimes) works there.

At the end of the show, there a clip of one of the songs from Brent’s “Seven of Nine” CD, a very catchy tune with clever lyrics called “Alien Abduction.”  If you want to see a “live” performance (11 years ago), there’s a clip Jeff put up on his channel of Brent busting out a 20 min set with friends with a number of songs from the CD (not to mention a short breakdancing bit on cardboard, no less):

And speaking of which, check out Jeff’s Soundcloud page for a number of new tracks he’s produced since coming on the show at the beginning of the summer.  His latest instrumental chillwave track:

As always, thanks for listening!  Next week more on Brent Simon!

In today’s show, I’m talking about something I’ve been meaning to do for a long time – rewatch Back to the Future, one of my favorite movies of all time.  As I’ve mentioned before, sometimes I’ve deferred rewatching the films I loved as a kid in the event  time rendered them in a more negative light.  “I’d rather remember you the way you were back then,” I’d rationalize to myself, not without some melodrama, and put the movie back on the shelf.

Which is, of course, ridiculous, since part of the draw of any good story is its ability to be appreciated on multiple levels, by multiple ages.  And despite knowing this, I still sometimes wanted to protect my childhood favorites.

I need not have worried with Back to the Future.  If anything, rewatching BTTF was like tasting a fine wine that’s been left to age a few more decades in the casket.  One taste reminds you of everything you’ve missed, sweeted by time.  And you think to yourself, “Why did I wait so long?”

Truth be told, BTTF has had over thirty years to let the embers of time add to its flavor.  So there were a number of layers to the film that I couldn’t have appreciated as a child of 8 or 9.  The teenage mix of independence, idealism, and bravado to hide the yearning for unconditional love and acceptance.  The wall of middle age, with its inevitable disappointments and losses, that has dulled the keen blade of adolescence to a blunted, beveled edge.  The lonely journey of the scientist, plodding away amid failure after failure with only the glimmer of rare success to guide the way.  The social commentary on gender roles and racial stereotypes.  The multigenerational themes that get passed from parent to child.  It’s all there, though I missed it the first few times around.

I also was surprised to see how much the Marty McFly character influenced the creation of Logan from The Thirteenth Hour.  I initially thought he was kind of like a young Indiana Jones type (like the character portrayed by Patrick Flannery).  Then after rewatching The Rocketeer, I was impressed how much Cliff Secord there was in him. And now, after rewatching BTTF, I can’t help but recognize how much Marty there is in his DNA.  Not surprising since The Thirteenth Hour paid homage to these films in various ways.  But I just forget all the myriad ways the films permeated the fabric of the manuscript from the very beginning.

In any event, speaking of beginnings, episode 100 is coming next week, and shortly thereafter, we’ll have artist, musician, and filmmaker: Jeff Finley.  His documentary about his friend Brent Simon, who sang songs about Spacecamp, means that there’s only one thing to be done sometime in the near future: rewatch the 1986 film, Spacecamp, and do an episode on it. And if that happens will Howard the Duck be far behind? Until then, we’ll be hearing from Jeff soon.

Episode 100 will have more details about an upcoming EP, the sequel to Long Ago Not So Far Away.  Podcast listeners get first dibs!  Stay tuned.  Follow along on Spotify!  There is also a growing extended Thirteenth Hour playlist on Spotify with a growing number of retro 80s songs.

This app for iOS and Android is a remarkably stable but passive way to earn some cash online by viewing short videos or animated gifs. Check out the link below for more info:

We talk more sci-fi and fantasy movies from the 80s this episode … like this one: 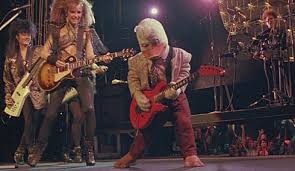 My brother, who you may remember as my first phone guest in Episode #30, recently visited for the holidays.  We did an in studio recording while trying to paint little plastic miniatures for the sequel to The Thirteenth Hour while discussing 80s movies and games we’d both enjoyed as kids.  This is part 2.  You can find part 1 here.  We continue reflecting on 80s films in this episode and touch on a few favorite video games from the 8 bit era as well.

Here are some of the movies and games we talk about:

-Highlander: The Animated Series (you can watch the series on youtube)

-Earth to Echo (a modern homage to E.T.)

-The Back to the Future trilogy

-Howard the Duck (here are some clips set to music from the movie with vocals by Lea Thompson and appearances by Jeffrey Jones and Tim Robbins – Don’t Turn Away and the ending song where Howard pulls some Marty McFly guitar riffs onstage).

As I mentioned last week, while were having this conversation, we were trying to paint little miniatures from Hero Forge, a site that allows you to create more or less custom miniatures (I made Logan and Aurora for the sequel to The Thirteenth Hour).  We had no idea what we were doing, really, though I got a lot of good tips from Mhawkinsart and Knives_mcdougal on Instagram.  Here are some pics of the process:

My first attempt at painting Aurora …  She kind of reminds me of an amphibian here.

Doing the faces was really hard …

My second attempt at doing Logan – now he looks like a burn victim.

The final attempt – now Logan looks like Mickey Mouse!  But I’ve lost patience to it again …

…but Aurora I think looks a bit better … the whole process of painting these little guys reminds me of soldering electronics (never was great at that) or trying to pipet things in a lab (bad memories from college), but it was cool to see the final effect.  There’s one more figured to go … you’ll see periodic updates on Instagram.

You can follow Jeremy on Twitter and Instagram as well to get real-time updates and his unique insights into games and how we play them.  He’s written a number of insightful articles on his Tumblr blog.  Here are some representative articles on the Lone Wolf game books and Quest for Glory (also here).

Happy New Year, and thanks for listening!