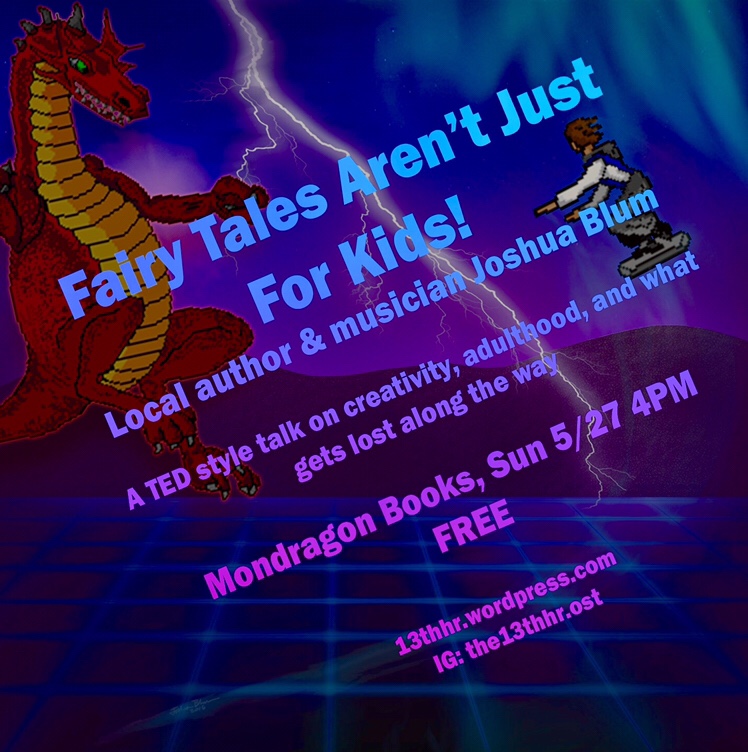 Episode #148: Fairy Tales Aren’t Just For Kids – A TED-Style Talk for Former Kids on Creativity, the Transition to Adulthood, and What Gets Lost in Between

A few weeks ago, I had the opportunity to give a short talk at Mondragon Books, an independent used bookstore in central PA.  They were kind enough to offer to carry some of my books and music and have been trying to have more author related events at their store.   The thing about a lot of author events, though, is that they’ve always seemed pretty self indulgent.  Sure, of course you’re interested in what you do, but in my opinion, inviting people to listen to you talk about yourself has always seemed like a snooze fest, so I decided to talk about something everyone grapples with sooner or later – the the transition to adulthood and the inevitable changes that entails in regards to the pursuit of creativity.   This episode is a version of that talk.

From a creative perspective, childhood is often ripe with opportunities to express oneself creatively.  Unfortunately, as we get older, those opportunities gradually narrow unless we actively choose a creatively-minded career or specifically make time for them.  Often, the message we are given is that we’ll never make a living doing something creative, so if we really want to do those things, we can do them “in our spare time,” as Keith, the teenage protagonist from the 1987 John Hughes-penned movie, Some Kind of Wonderful, hears from his father.

So my hope is that this talk will get people thinking and inspire them to reclaim these lost aspects of childhood if they so desire.  I use the analogy of fairy tales, since they’re stories that we typically associate with childhood, but, in actuality, have a lot of lessons that adults can benefit from, too.   For example, fairy tales often have happy endings, which help us believe in a better tomorrow.  Fairy tales also tend to invoke the hero / heroine’s journey, which reminds us that big dreams often require some level of personal sacrifice and persistence in order to accomplish.  All of these things are great to keep in mind when it comes to giving voice to our own creativity, especially amid the hard, mundane realities of day-to-day adult life.

Sometimes talks of this nature are mostly theory, given by folks who are no longer in the position to juggle various commitments.  But I can say that it’s something I basically took from my own life and put into a short talk.  As someone who spends a good majority of his time juggling between being a husband, a father to small children, and maintaining a busy day job, making time for the creative aspects of my life is a constant challenge. You see the results here, but it requires a daily commitment to feed the muse.

I wrote this little essay back in 2015, not long after the birth of my daughter, when I initially (mistakenly) assumed that staying home to take care of her would allow me more time to write (nope … though it did require me to take advantage of every spare minute I had – something I continue to use today).

When I was twelve, I wanted nothing more than a Swiss Army knife. My father had one, and I used to marvel at all the tools that fit in the compact package. Years later, I still marvel at its attempt to “do it all.” But sometimes, a stand-alone knife or can opener just does the job better.

So when I told colleagues that, over the next year, I wouldn’t be working much, instead devoting the majority of my time to caring for our newborn daughter, deep down, I wondered if I’d end “Swiss Army knifing” it. People had mostly supportive words. Of course, there were some puzzled looks and occasional sarcastic or condescending comments, but what I didn’t expect were the rare, wistful silences (generally left by men), followed by, “I wish I’d taken more time to do that.”

Time, that ephemeral commodity. Before the baby came along, I joked with my wife about what I’d do if I were a stay-at-home husband. I’d water the plants. I’d do aerobics in front of the TV like it were 1982. And I’d finally have time to write.

It wasn’t all jest. Even after the baby came and all evidence suggested otherwise, I still maintained the delusion that when the baby slept, I’d really, truly have time to write. And so it was – except those stretches of quiet lasted a total of forty to sixty minutes a day if I were lucky. Amid all the baby and home related tasks, writing was the last on the list. On the days I worked, I’d go in after my wife and I had done the baby handoff and finish in the wee hours of the morning, so zero writing got done those days. And when the baby woke up in the middle of the night, or at least by at five or six the next morning, I was reminded why my mother was always tired.

Single parents have now assumed epic status in my mind. I’m lucky that my wife takes over in the evening. But despite everything, I look forward to each new day. Seeing my daughter’s smile, her waddling, ataxic steps, and the first gleams of mischief in her eyes make up for the times poo plopped out of the diaper and landed on the floor instead of in the toilet. I understand why those men said they wished they could’ve had more time to watch their children grow. Because I wish for the same. No time is ever enough.

Those naps did eventually add up over a year. I coalesced some of these thoughts into a poem and reworked pictures from one of my novels to create a little book for my daughter, which I’ll give to her this Christmas. I’m sure one of the first things she’ll do is take a bite out of the pages. And I’d like nothing more than to be right there to see her do it.

Thanks to Mondragon Books for hosting me.  Check them out if you happen to be in the central PA area or on Facebook or Instagram. 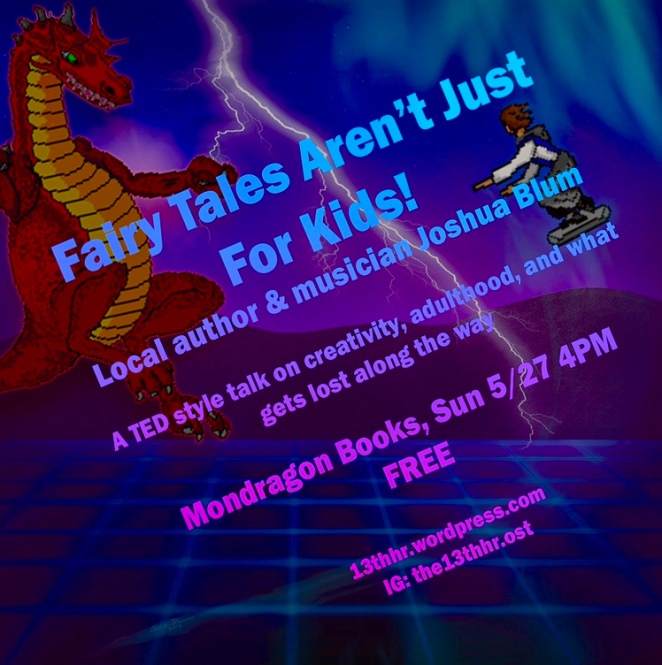 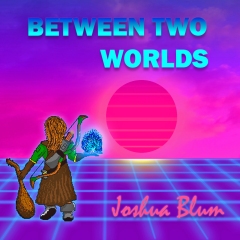 Stay tuned.  Follow along on Spotify!  There is also a growing extended Thirteenth Hourplaylist on Spotify with a growing number of retro 80s songs.