For awhile when I was a kid, I wanted nothing more to be an American Indian.  Of course, my conception of being an Indian largely revolved around making fishing poles, shooting bows and arrows, and running around in the woods.  That’s pretty much it.  I’m sure I would have been disappointed to find out anything else, but such is life as a child.

One of my favorite books, The Sign of the Beaver, had a chapter where the main character learns to make a bow.  The premise of the book is that the young boy, left alone in the woods while his father leaves for months to bring his mother and sister to their cabin, is eventually befriended by an Indian tribe, who teach him how to eck out a life for himself without the white man’s tools (like coal and black powder).  They also teach him a fair bit of their culture.  Such subtleties of plot and culture, were, of course, lost on my twelve-year-old self.  The part I remember is the bow chapter, of course, which I dogeared to read 20+ times. Thus began my odyssey with the bent stick.  And many a stick I bent, many more I broke.  For some reason, I tended to use the worst wood possible.  Do you know those flat pieces of wood that are in vinyl shades?  The piece near the bottom to give you something to grip when pulling down the shade?  I’d pull those slats out, tape a few together, attach a string, and there would be a functional, if weak, bow.  Sometimes, I’d find a piece of flat molding in the garage and try using that.  The problem with all these attempts was that the wood was almost always pine, which was entirely too soft a wood to use for a proper bow.  So these all inevitably broke with enough use or if I drew them back too far.  I had slightly more luck trimming fallen branches from the oak and maple trees in our yard and making arrows out of relatively straight wooden dowels I found lying around the house.  Even with the instructions from The Sign of the Beaver, all these bows inevitably broke and/or did not shoot terribly well.

Eventually, my father either took pity on me or decided that he’d had enough of me shooting holes in the drywall and took me to a real archery range about 20 minutes from our house, where, presumably, I could shoot holes in someone else’s drywall.  There, I learned how to properly shoot a bow.  So, for a few years, this became a kind of weekly ritual which I now look back on fondly – my father would take me to the range for a few hours on Friday night, and he and my younger brother would go do some grocery shopping or other errands.  My brother always loved these outings, as I recall, since he usually managed to get my father to take him to a comic book shop that wasn’t far away from the range.

If you’ve never been to an archery range, it’s quite different from a range where there are firearms.  It’s less noisy, of course, so no one needs to wear ear protection.  Eye protection is not needed, either.  I’m not sure about this, but I imagine that people being less walled-off against the potential self-inflicted dangers of their weapons probably lets down other social barriers as well.   Imagine it being kind of like being in a bar on a weeknight (like, say, Tuesday) minus the alcohol.  There are a group of regulars – generally men in their forties to sixties, often hunters, sitting around chatting, smoking, fiddling with their equipment, and occasionally taking a few shots with their bows.  The TV is usually playing in the background (or at least the radio).  There’s usually an area to buy food, often a vending machine, but occasionally a convenience store-style fridge with cold drinks, and these machines sometimes see more action than the bows do.  The decor is decidedly seventies at best – wood paneling is the usual staple, and perhaps not surprisingly, women are a sort of rarity (this may be changing though, more below).  The atmosphere is generally warm and relaxed, with plenty of good-natured ribbing, but in a casual sort of way.  The smells are earthy and homey – stale coffee, cigarettes, wood finish, and oil.  The sounds are as well – chatter from the men discussing their latest hunt, the laugh track from whatever sitcom is playing on the TV, the twag of bowstrings with thunks as the arrows thud into the backstops downrange, and someone occasionally yelling, “clear!” – the signal that it’s safe for all to walk down and retrieve arrows.

All in all, not a bad place for a pre-pubescent boy to observe groups of men in their natural habitat.  I was generally the only kid there, but I don’t think anyone really minded.  Occasionally, someone would stop by to give me pointers, ask about my bow, or help me adjust the sights (that thing was always getting knocked out of alignment) so I could actually hit something.  But for the most part, people let me do my thing.  It’s not like women and children were prohibited, because as far as I know, there was no age minimum to shoot, and there was no “No girls allowed!” sign on the door, at least not literally.

What was clear, even to a pre-pubescent boy, was the range represented an escape for these men.  An escape from the daily grind of their jobs and other aspects of their lives, a chance to revel in the glory of a hunt, a chance to hone their skills in a martial craft from an era when men relied on bows to bring food to the table and defend their homes, and a chance to do, you know, stereotypical male things – burp, fart, scratch their genitalia, eat junk food, tell dirty jokes, watch bad TV, comment on the relative hotness of the actresses on said bad TV shows – all in a place where no one else would really care, either.  But if you asked them, I’m sure plenty of the guys in the range would have loved having more women around – at least, in theory.  Having a mix of genders does change the dynamic somewhat (sometimes for the better, sometimes probably less so).

All that was over twenty years ago, so things may have changed, and who knows, I may be remembering things differently from the way they actually were.  Such is the way with memories. At the time, archery seemed less … public.  Less well-known, from a bygone day, more like something out of the back of an old comic book.  Cool in an old Boy Scout knife kind of way, but not exactly on par with soccer, basketball, hanging out at the mall, or whatever other kids my age were doing with their time.  Of course, there were notable popular cultural exceptions (see below for pictures).  There was always Robin Hood and his famous splitting the arrow trick, in paper, animated, and live action forms.  There was Rambo, the Army Ranger still mentally grinding through Vietnam that could live off the land and eat things that would make a billy goat puke, who did quite well for himself with a bow.  And there was Arnold Schwarzenegger, using a homemade bow to defend himself against the Predator.  And there are probably plenty of other good examples that I’m not mentioning.

Today, however, bows are a part of popular culture in a way that even Robin Hood, Rambo, and Arnold could never have competed with.  A few examples out of many: The archer, Katniss, from The Hunger Games series, is pretty much a household name (and I wouldn’t be surprised if a rash of people in 2014-2105 name their kids after the character).  (See this article from the NY Times on the impact of the character on archery.)  The DC comic book hero Green Arrow, a sort of Bruce Wayne equivalent in a different city sporting a bow rather than a Batarang, has his own TV show, on its third season, no less.  Hawkeye, the Marvel equivalent archer, is a character in the popular Avengers movie and has a rebooted solo comic series.  The popular video game Skyrim has a number of fantasy style bows to use from both a third and first person perspective (see this article for other games with bows).   And the Tomb Raider reboot in 2013 had a young Lara Croft sporting a bow as her default weapon rather than her usual twin pistols, and thanks to well designed controls, it was surprisingly intuitive and easy to use. 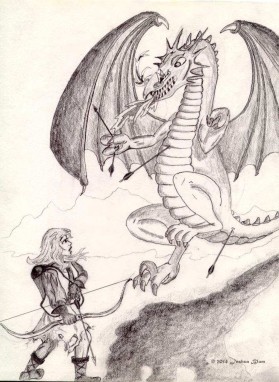 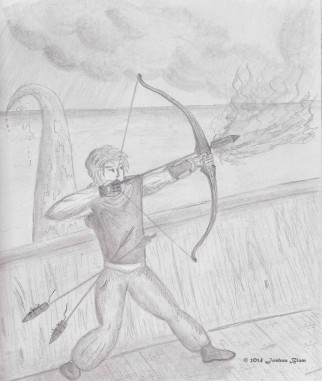 Archery featured in The Thirteenth Hour

At the time when I wrote the first draft of The Thirteenth Hour, I just put in little bits of archery here and there because I liked it and thought it fit with the world the characters inhabited.  But certainly most people in the wider culture couldn’t have given, as King Darian, a character in the book says, “two rat’s rears” about it then.  So I guess if you wait around long enough, things become popular that weren’t.  And I’m sure the rise and surge in archery lessons brought on by the appearance of all these big screen heroes with bows will ebb and eventually die down after people discover that 1.) archery equipment is (still) way overpriced, 2.) owning a bow does not make you shoot like Katniss Everdeen, Hawkeye, or Green Arrow, and 3.) like anything else, it takes a lot of work and practice.

I do hope, however, that archery will emerge better than before given this recent surge in popularity.  In terms of society as a whole, goodness knows modern civilization can benefit from any kind of activity that gets us off our duffs and using our muscles for something other than texting.  I also hope that archery itself will see this as an opportunity to recruit a more diverse constituency and in turn, begin to tolerate a wider array of practices.  It’s fine to nit pick about correct form and all, but at the end of the day, people have been shooting bows for thousands of years, and there are plenty of ways to shoot a bow from all over the world, not all of which are the ways people are taught now (at least here in America).  At the end of the day, if you can hit what you’re shooting at, shouldn’t that be good enough?

In the next few posts, I’ll continue this topic with a few more archery-related posts.

Arnold aiming at the Predator

Katniss from The Hunger Games trilogy

Skyrim – the game already has a many bows in it; this is one of the many mods for it that just happens to be about making the bows even better …