Inspiration is an odd thing.  The muse comes, I find, at the oddest of times.  Sometimes she stays for fleeting moments; other times, she lingers for days.

When I was writing the passage below for The Thirteenth Hour, I thought it needed an accompanying image:

“… I’ll always remember the time we spent on those lonely strips of land. The night sky was beautiful there. I’d looked up at the night sky all my life, but this was the first time I really saw it. Looking up and seeing only a lifeless void of blackness whose only light came from tiny perforations in the alabaster mantle may seem frightening and lonely. And it was, at first. But it was comforting, too, because the sky, the open space, the wild terrain, it only accepted, it never asked me to be anything other than what I was. I felt that if I could just capture the feeling of those nights, bottle it, and store it in a safe place inside myself, I could ration it out to last the rest of my life, to erase the turmoil of the last year.”

But, alas, by the time the words were written, the muse had flittered away and stayed on extended sabbatical (at last as far as this image was concerned) for years.  A few weeks ago, however, she returned long enough for me to draft a picture, which eventually became the colorized image you see at the end of the post.  I documented a few steps along the way:

Before the muse took off for good, I sketched this scene by hand in pencil.  I was trying to capture a vast landscape under a blanket of stars.  Like a Chinese landscape painting, small human figures are present to show how small they are in the grand scheme of this universe of empty wilderness.

At this point, I have inked the outlines of landscape features such as the Milky Way band, the moon, and the ocean, preferring to stipple in shadows, sand, and other small details with the point of the pen.

And now, the coloring process has begun.  Although I have begun using computers to make the drawing process easier, I still prefer drawing and coloring the initial print by hand (in this case using colored pencils). 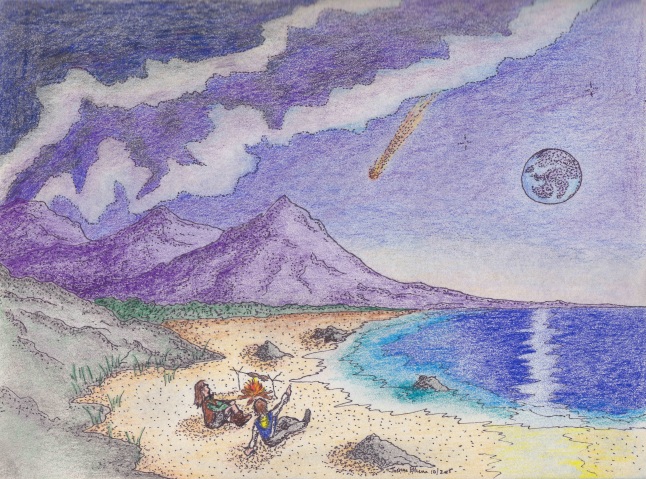 The colors have now been laid out.  However, there are some details lacking, and the picture is still too light for it to be realistically happening at night.  So now, it’s time to scan the image and work on it digitally.

This is the final image, doctored and detailed with Photoshop Elements. Although it is still brighter than it would be during a real night, there’s enough darkness to convey it’s night while still retaining the details of the beach and its sole inhabitants.

If you enjoyed this post, I’ll have more in the future.  Thanks, as always, for reading.