This week, Jeremy and I are tackling the 1982 TV movie, Mazes and Monsters!  This was a movie (based on a novel by Rona Jaffe) released in the midst of the popularity of Dungeons and Dragons as well as the public fear/backlash of the Satanic panic and all that.  Not surprisingly, it’s a bit of a shlock fest, but we have a surprisingly nuanced discussion on a variety of topics related to the film, role playing games and adjacent activities, distant parents, 80s social panics, steam tunnels, and more.  You can watch the film for free on Tubi (click on the VHS cover below to watch) 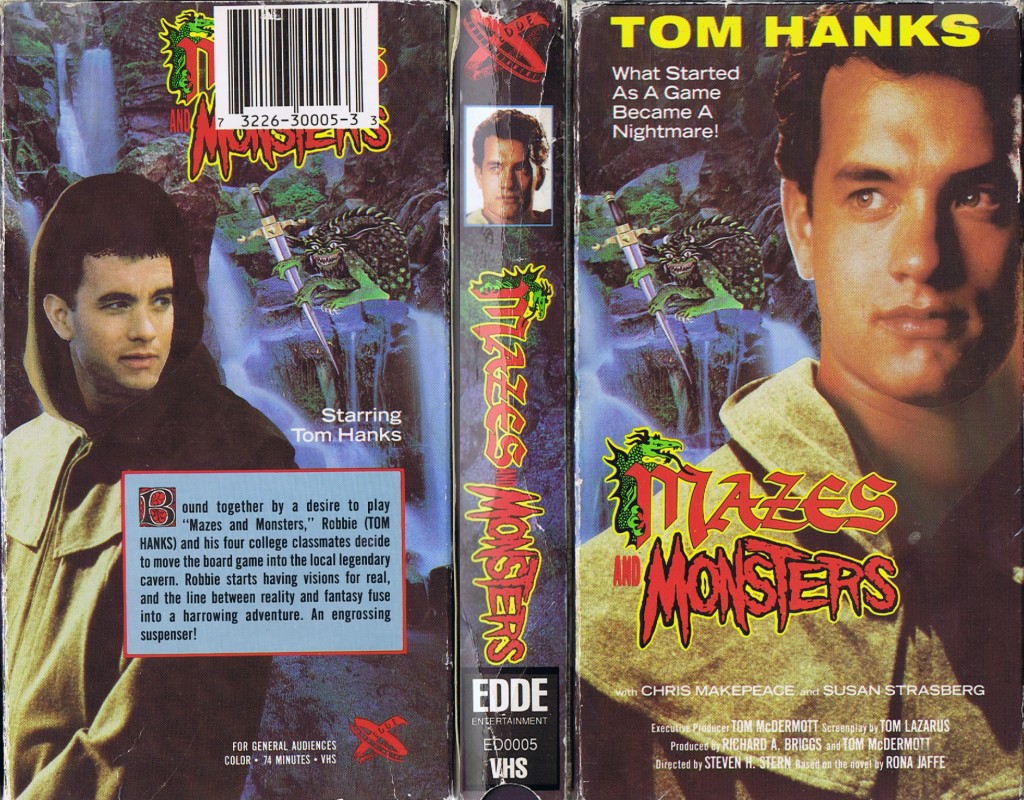 Ironically, the showing of this TV movie was sponsored by Proctor and Gamble, who acquired the stomach discomfort drug Pepto Bismo also in 1982! 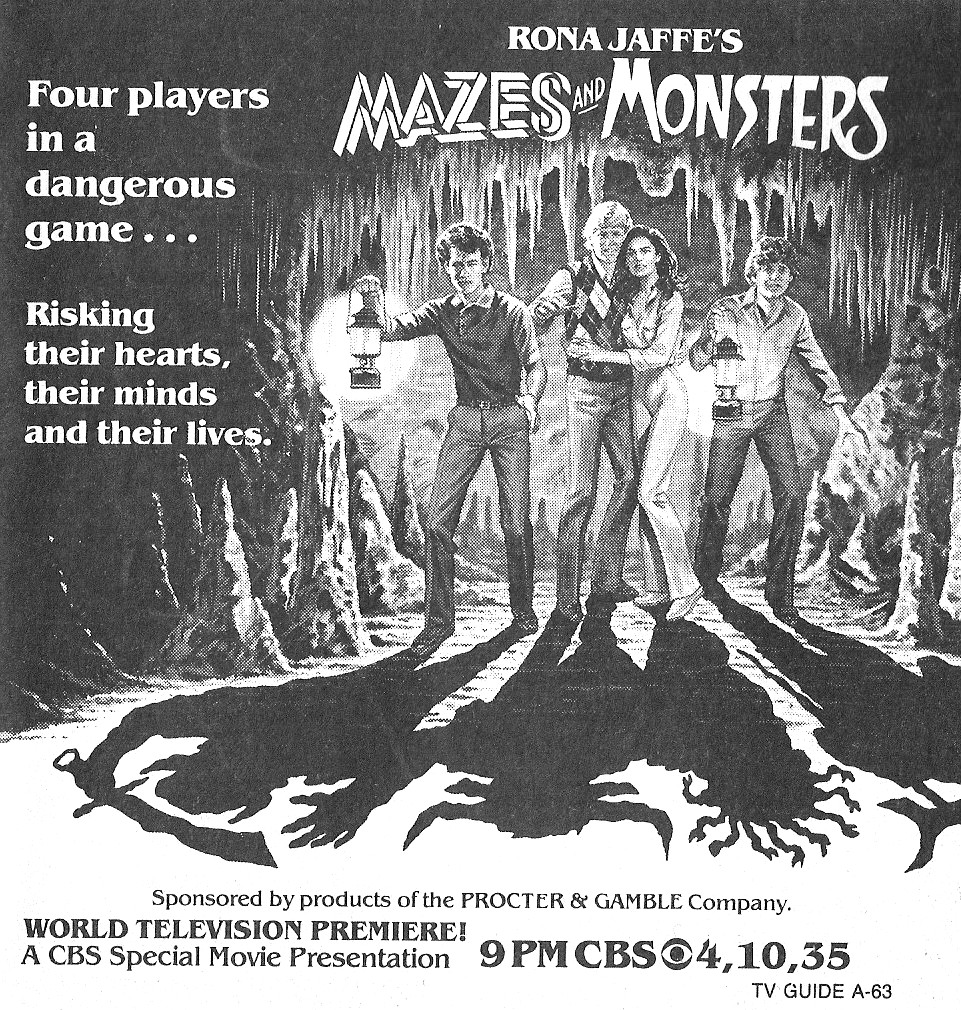 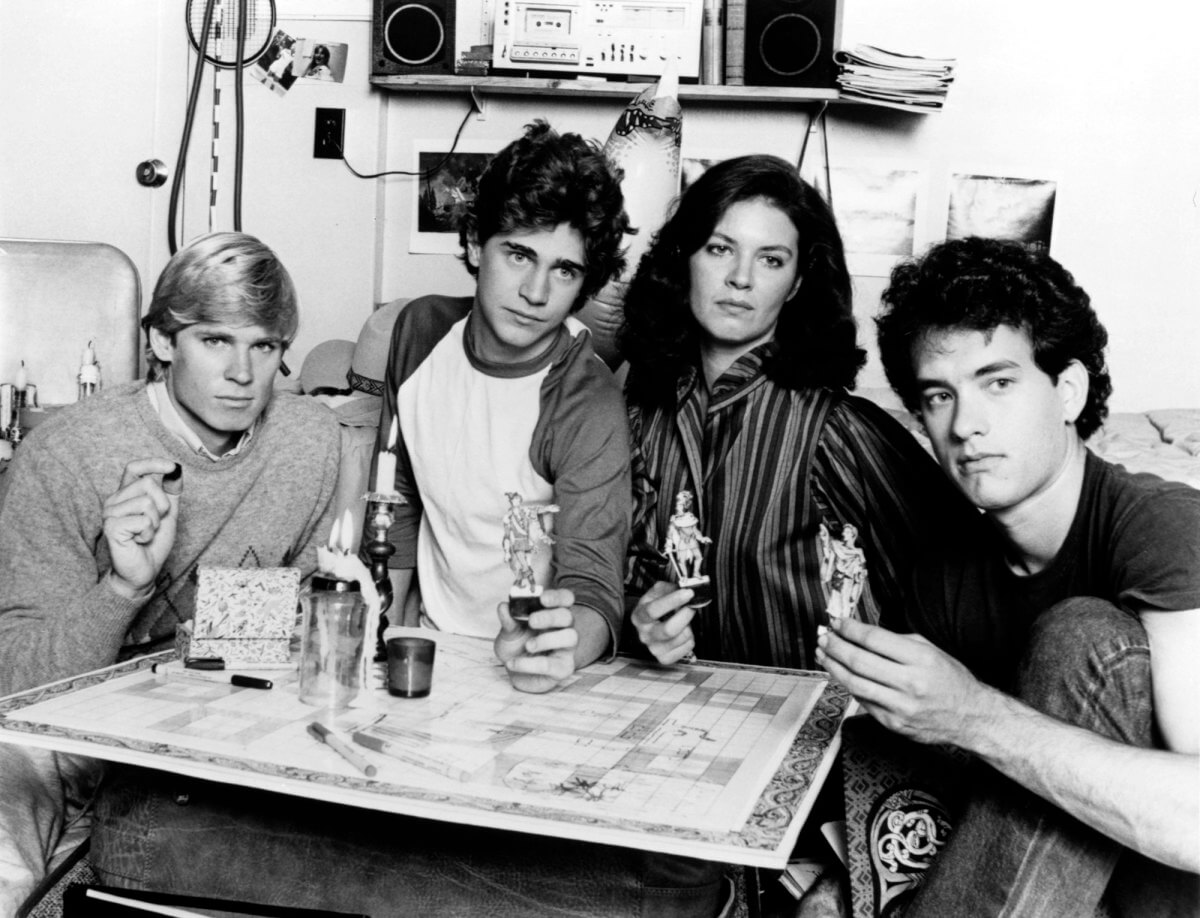 The main cast of Mazes and Monsters with their characters and game paraphernalia.  Below, the article about the book the film is based on from the 7/1983 issue of Dragon magazine is below. 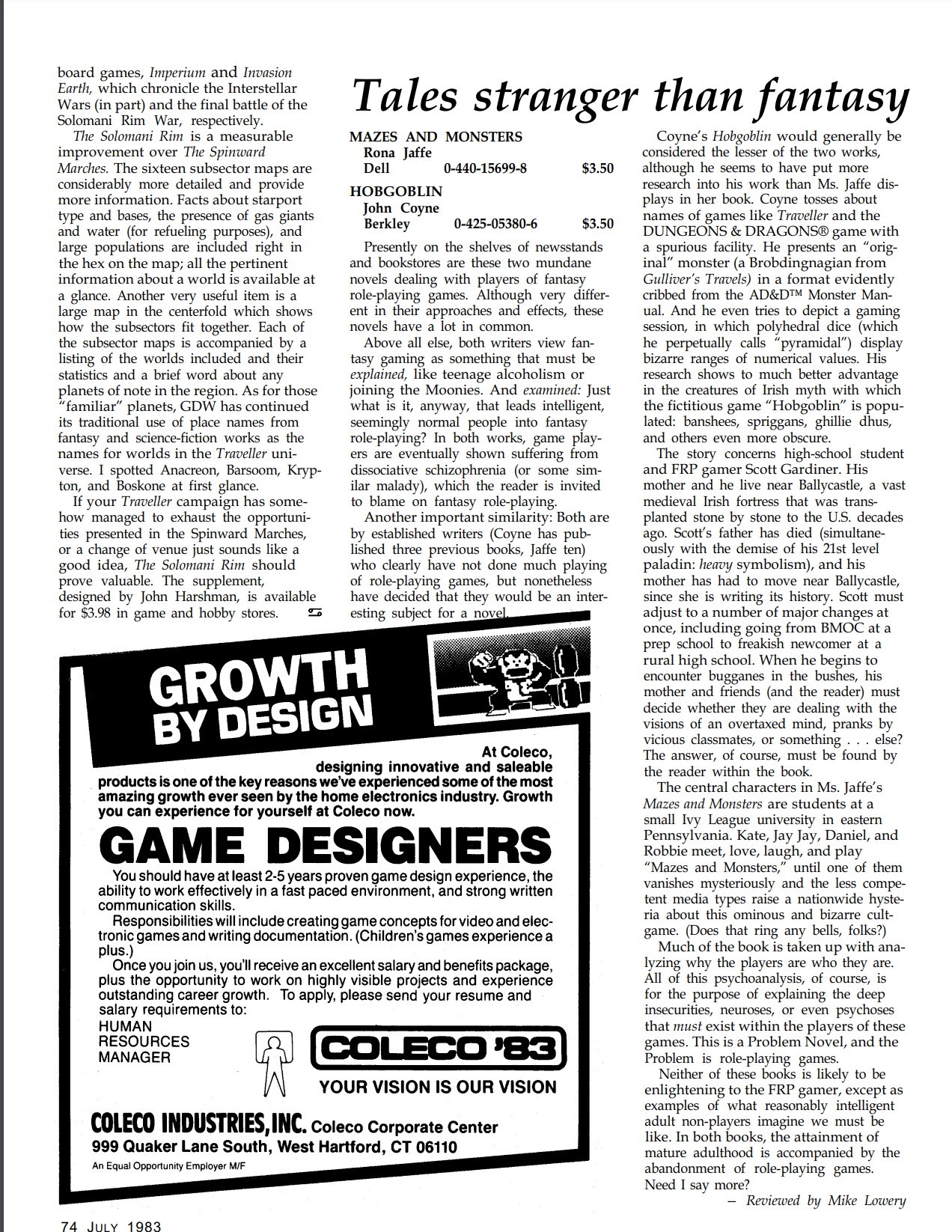 There are a few things that are notably positive about the film that I think deserve some mention.  I liked the scene where two of the characters are painting their miniatures.  I liked the fact they had game notebooks.  Then there’s the interesting subject of gender, which has an interesting history in DnD.

I think it was notable that the story actually included a female character at all, and she took a more active role in the story (the fact the book was written by a woman may have had something to do with it).  Glacia (Kate Finch) was the party’s only fighter, which I think is notable since Dungeons and Dragons was still fairly overtly unbalanced in its gender roles.  At the time of the filming of this game, DnD was still in its first edition, where female characters of different races had lower stats (e.g. lower strength) and the game was generally written using only male pronouns (e.g. “fighting men”).  Although the female : male player ratio is more even today (about 60% male : 40 % female), it was apparently much more male dominated at the time (estimated around 10 % female in one source I found).

As we talk about in the episode, DnD drew heavily from earlier (more male dominated) historical wargames, so it’s interesting to hear what female players of the time thought of it (here’s a interview with RPG pioneer Jean Wells, the first woman hired by TSR).  However, my main exposure to DnD as a kid in the 80s came not from the actual game but from TSR’s Endless Quest books, many of whom were written by a woman, Rose Estes, a TSR employee who, like many other women of the time, was frustrated at the male centric nature of the game and the play – centered around stats, dungeon crawls, and combat – which she felt took away from the telling of a cohesive story.

So I think it is admirable that this film gave the fighter class role to a woman, who, though she does feature in a requisite love triangle, is not passive in her involvement in the main story.  She seems to be the only one for most of the film that actually owns a car, and the movie does not relegate her to passenger status in favor of having one of the male characters drive it.  Again, perhaps the film was just staying true to the original source material, but in that case, good on them for not changing it.

Also, as mentioned in the episode, my interpretation of the film’s ending differed from most of thoughts found in the reviews I read at the time or since.  As much as the game was depicted as an experience potentially blurring the lines between reality and fantasy, I thought they also seemed to be saying that this was a way, separate from the world of distant adults, where four lonely young adults could connect with each other.  Such is the power of make believe (normally relegated to the word of children), even, in the end, cutting through psychosis.   When I saw it, the ending seemed to be saying that while aspects of day to day adult reality can be drab, disconnected, and limiting, it doesn’t have to be that way as long as there is still a human connection that binds people together.

Check out Jeremy‘s work over at Pixel Grotto, CBR.com, and Classic Batman Panels on IG.  You can support his work on Ko-fi and get access to in-depth, exclusive Batman content here.   If you are of the DnD persuasion, his articles on DnD Beyond may be right up your alley.  Thanks, Jeremy, for coming on the show!  We will be back with another look at another fine piece of cinema!

This winter, if you’re looking for an adult of child mask, check out Thirteenth Hour mask combo package on Etsy.  This fall, it became really hard to find good quality masks for our kids as they were going back to school.  There are still long wait times for some of the companies we like best, so I thought, why not try to find an alternative?  I eventually settled on the triple layer masks available for printing on by the company Flashbay.  They were one of the few companies I found that were transparent about their third party safety data (Junior: https://static.flashbay.com/images/certificates/Junior_REACH.pdf?v=1617870020, Adult: https://static.flashbay.com/images/certificates/Sky_Performance.pdf?v=1603078812) which is nice.  I was impressed by how well these masks performed on the filtration tests, even after repeat washings.  Also, I really liked how both the ears and nose piece could be adjusted for a good fit. 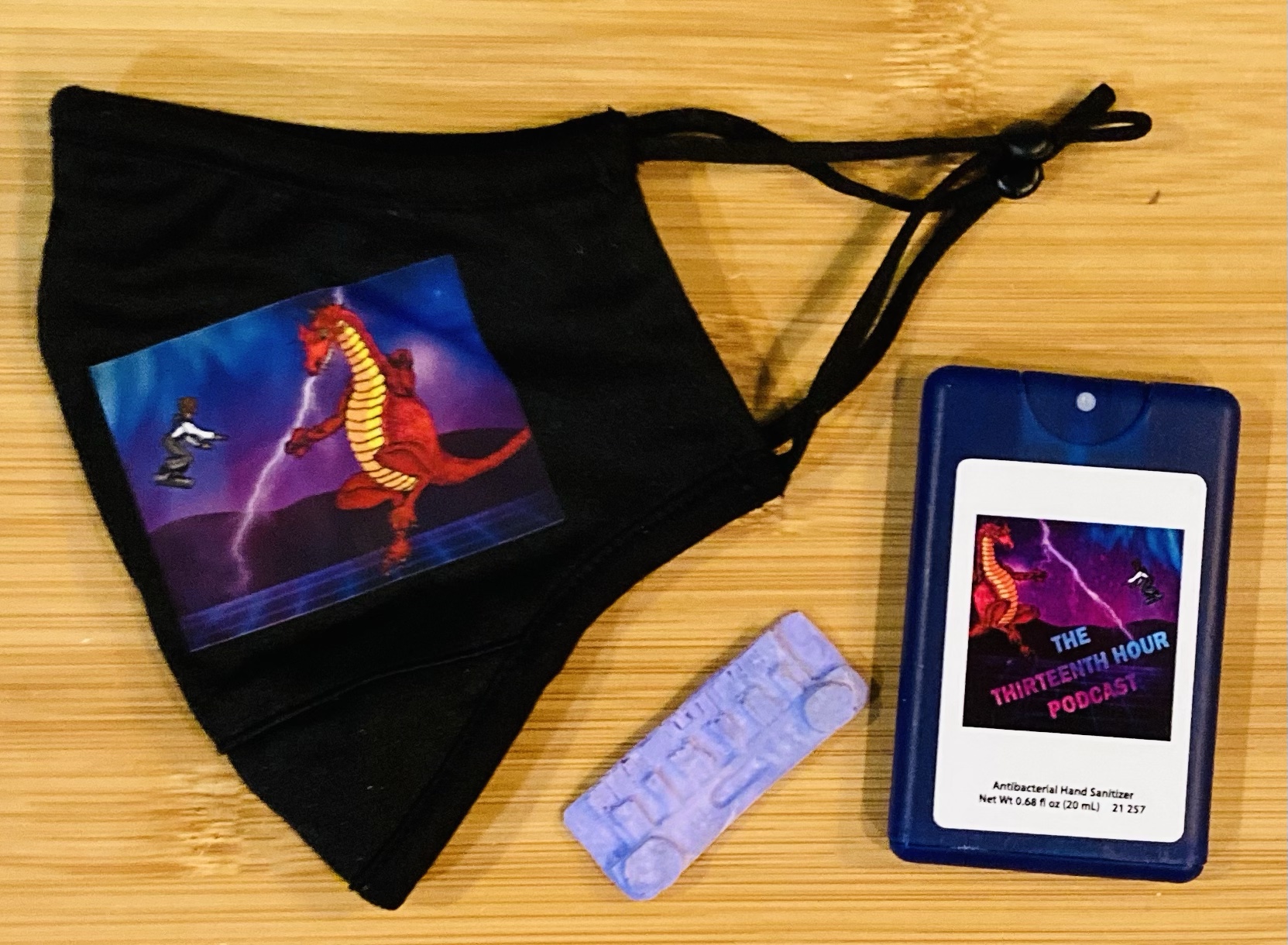 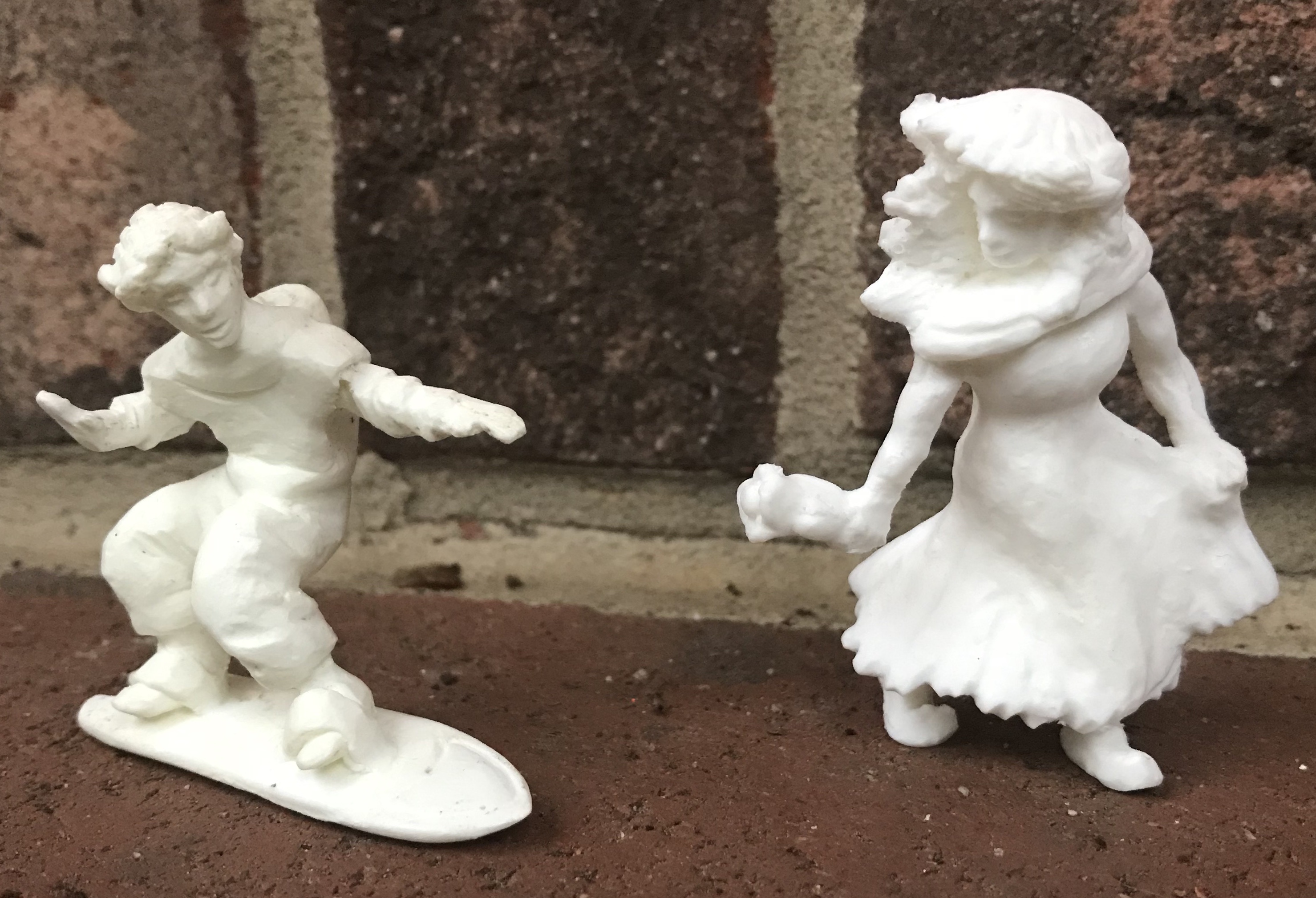 If the past few months have got you needing a break, you may want to chill out to this 80s synth throwback track for a upcoming LP with the accompanying music video: