Episode #61: Replaying the PC game, The Last Express, after 19 years

Today’s episode is all about storytelling in a slightly different form than the books usually featured on this site.  It’s about how the 1997 adventure game created a sense of being an international traveler dropped in the middle of a web of intrigue and mystery in the days leading up to WWI and what it was like replaying this game almost 20 years later.  My brother and first played this game on the PC in 1997, shortly after it came out.  Interestingly, we both recently replayed the updated version and have now both written about our thoughts.  My bro’s are here:

This was one of the first games I ever played where characters move about independently regardless of what you happen to be doing.  They speak English, Russian, Serbian, Arabic, French, and German, not all of which your character understands, and much of the game consists of overhearing conversations and downright spying on your neighbors.  Doesn’t sound like it’d be interesting – but … it is.  The ever present ticking clock (which can be rewound to replay a sequence and try out new actions) running in the background as the Orient Express makes its way to Constantinople becomes a character in itself, just like the train, loving re-created from an actual Orient Express passenger car.  Little touches, like the clink of wine glasses and silverware in the dining car, the glint of gold in the art nouveau style decorations in the bathrooms, and the period paintings on the walls really capture the feel of what the gilded age must have been like and do just that much above the ordinary to create an immerse experience.

Here are some screen shots from the game:

Your character, Robert Cath, is on the right.  In this scene, you’ve taken on the role of your murdered friend (who you’ve come to realize was into some heavy shite) and are trying to get gun runner Herr August Schmidt, the roly-poly gentleman on the left, to buy that you want to do an arms deal with him.  You have to convince him with this briefcase of gold that you can afford the hardware.

Of course, not everyone is as they seem and not everything goes as planned.  Why so many guns on this train?  The war hasn’t even started!

Much of the game centers around this mysterious firebird automaton that everyone seems to be after.  They seem to have killed your friend to get it …

… even though, frankly, when it all goes south near the end of the game, a little firepower would probably come in handy.  Here is our hero with dukes up, ready to engage in fisticuffs like it is 1914.

There are a few of these fights in the game, though this is the only one against an unarmed opponent.  The fighting mostly consists of timing your ducks to evade incoming blows and counter-punching at the right moment.

In this sequence on top of the train, your opponent has a metal staff.

If you win that altercation, you can thankfully liberate it from your opponent …

… which is handy, since your next opponent wields a sword!  Since this same character was brandishing a rifle earlier in the game, I guess she decided to dispatch you in style rather than just shooting you.

And if you live through all that, the journey continues …

If you haven’t played this game, do yourself a favor, and give it a go.  You can find it inexpensively on Steam, iOS, and Android as well as old copies on CD on ebay.  Check out creator Jordan Mechner’s website for more info.  Here’s a great FAQ & walkthrough for the game as well as a link to an awesome fan site where there’s a visual walkthough on youtube with translations of even the languages Robert doesn’t understand, like Serbian and Arabic. 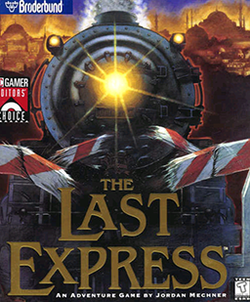 One thought on “The Thirteenth Hour Podcast #61: Reflections on Replaying Jordan Mechner’s The Last Express”