There was a time when my brother and I decided we were going to make video games.  My brother had discovered this graphical game making program called Klik ‘n Play on the internet and a small community of people using it to make a wide range of computer games.  The advantage of it was that it allowed someone without a lot of programming experience to make games fairly quickly.  The developers were in France, I believe, and the program was somewhat hard to find.  But our father managed to find a copy somewhere on the still nascent internet, and my brother went to town.  I was a little late getting on the bandwagon but eventually threw my hat in the ring, too, with my ultimate goal a rendition of The Thirteenth Hour in video game form.  Although that never entirely happened, looking back on what we did ten, no, wait … (does mental calculations) … sixteen years ago is something I hadn’t thought about until I recently found a bunch of old notebooks showing sketches and game play notes.

One of the first games I completed was a Tomb Raider fan project called “Tomb Raider – The Unicorn Quest.”  All the animations were hand drawn, then scanned in.  I have no idea where it is now – possibly still floating around on the internet, but to be honest, that’s probably for the best.  It was my first attempt at making a game, and … I’ll leave it at that!

Some time later (a year or two?), I decided I would use an updated version of the Klik ‘n Play software, called The Games Factory, to make what I envisioned would be a proper 2D Tomb Raider sidescroller, kind of like the ones that came out for the Game Boy Advance a little later.

I progressed pretty far but eventually got stuck with the game play mechanics.  It was hard to make Lara control well consistently.  For a game that required at least some vaguely precise  targeting for shooting and platform jumping, it ended up being more an exercise in frustration than anything.  It probably had a lot to do with my design or maybe the software, which was quirky, not to mention buggy, at times.  In any event, other life events got in the way, and as much as I hated to admit it, I kind of “lost the spark,” to use a phrase my brother coined to describe what happened when people started projects (like games) that never got completed.

However, after rediscovering the notebooks, I located the files that had been sitting, gathering digital dust for all these years and wondered if I should do something with the animations.  Looking at them now, I reckon I must have spent hours on them, and even if the game never came together, I must say that the animations came out not half bad.

Maybe one day, I’ll use them in a little movie along with the cutscene illustrations that I drew and still have (here are a few). 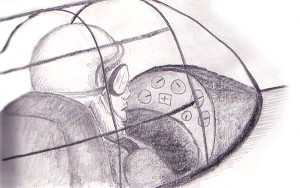 Or, who knows, an updated version of The Games Factory, called Multimedia Fusion, is available on the web, and it’s quite powerful.  I used it to create the animations for The Thirteenth Hour trailer and music video, as well as to touch up the Lara Croft ones which I’ve embedded below.  But I think to use it for game design, I’d need a refresher, since, alas, I’ve basically forgotten most of the programming that I knew.

In any event, if you’re a game developer and are interested in using these animations in a fan game of your own, please feel free to do so (all those below are animated .gifs made on this site using stills from the original game file.  They were saved with an alpha channel so they superimpose easily over things – in other words, the background is transparent).  They’ve sat unused for so long that I feel at least someone should use them.  I only ask that you reference this webpage in your credits and let me know when you’ve done so I can play your game!

same as above but in a hooded cape – I’d envisioned a level where Lara was running through city rooftops dodging ninjas (yes, very 80s) in the rain, hence the hooded cape getup.

running in the cape

shooting twin pistols – you can’t see the ejected bullet casings since they were a separate animation, though if you kept your finger on the shooting button, a shower of shells would erupt from the guns 🙂

doing a one arm handstand to shoot down – in real life, she’d be firing into the ground, but I figured for a 2D platformer, the bullets could bend reality a little.

backflip – saved my favorite for last

In the future, I’ll post more animations like this of other unfinished games, including ones from The Thirteenth Hour.

Thanks to all the developers from Core and Crystal Dynamics for the Tomb Raider games over the years and making Lara Croft do backflips (my favorite part and the main reason I started playing these games in the first place – the flipping has been notably absent lately; please consider bringing the flipping back if you’re reading =)